A market correction is a recurring phenomenon in crypto. Cryptocurrencies, from high to low market capitalization, may experience severe corrections of up to tens of percent. This is because the crypto industry is a relatively new and small financial market in which volatility dominates. Nevertheless, market corrections tend to appear worse than they actually are. After all, Bitcoin and Ethereum pulverized their all-time highs in the middle of this year, with several corrections preceding them. 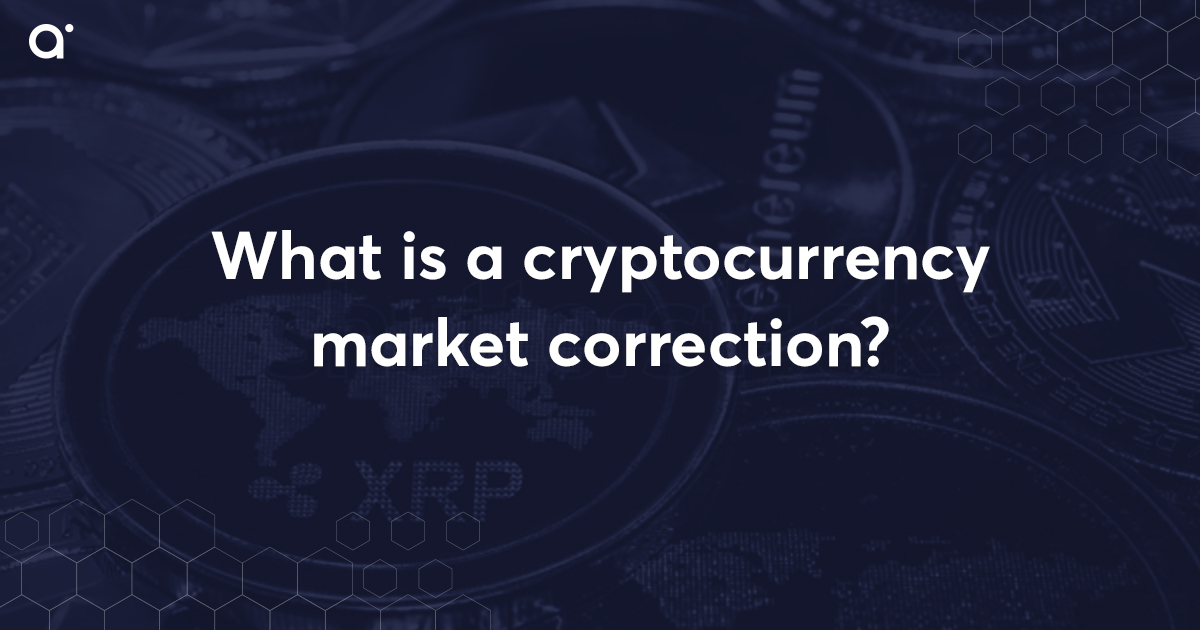 What is a correction?

A market correction can occur in any financial market. Thus not only in crypto, but also in the stock and bond markets for example. A correction is characterized by the fact that an asset loses a significant part of its value in a short period of time. This correction is often the answer to the price of an asset which has risen abnormally. The correction brings the asset price back to its long-term trend. In addition to an abnormal rise, other factors such as macro-economic shifts can also lead to a market correction.

Corrections do not have to apply to the market as a whole. They can also occur for individual cryptocurrencies, like Bitcoin, Ethereum and Cardano, etc. In general, one speaks of a correction when the price has fallen by 10% from its most recent peak. In the crypto market, it is only natural to see declines of greater proportions. A correction of between 20 and 60% occurs regularly. This is because the crypto market has been very volatile so far.


How does a market correction work?

Corrections are the counterpart to a bull run, which represents a period of sustained price increases. However, corrections and a bull run are connected like Yin and Yang. Here's the thing: when cryptocurrencies rise in price for a longer period of time, they become overvalued, which results in a price of the crypto that does not correspond to its value. As a result of the high price, investors will be discouraged and the demand for cryptocurrencies will decrease and the supply will increase. This marks the beginning of the correction.

Several traders and investors sell (part of) their crypto assets to collect profits. In combination with negative news (FUD) or other external factors, the correction may intensify. The cryptocurrency suddenly drops very sharply and other traders and investors fear the worst for the price of the cryptocurrency concerned. They will now also sell their crypto currencies and accept any losses. This chain reaction may continue for some time, until a price is reached at which demand has increased to such an extent that the price fall stagnates.

Examples of market corrections in the past

During a bull run, most cryptocurrencies experience (multiple) corrections. Take Bitcoin as an example: one Bitcoin was worth 64,000 dollars in April, which was a new all-time high for Bitcoin at that time. On the way to its all-time high, Bitcoin experienced multiple corrections, some corrections were even around 40%. Despite the corrections, the price continued to rise over a longer period of time. In most cases, the price of a cryptocurrency never goes up in a straight line. To reach the next peak in value, the price goes through ups and downs.

As a reminder; #Bitcoin could even correct to $48-50K and still be bullish.

I'm expecting a lengthening cycle to take place and a healthy correction belongs into that.

In the crypto industry, during a bear market, price declines can take frightening forms. Declines over a relatively short period (a few months to weeks or even days) can exceed 70 %. In the bear market of 2018 & 2019, Bitcoin fell by more than 80 % in value. For most altcoins, the general name for every other cryptocurrency apart from Bitcoin, price declines were even more extreme. Price drops of 90 % to 99 % were the rule rather than the exception during the bear market.

How do you protect yourself from a market correction?

A correction of tens of percent’s is a reason for some investors to become restless. Short-term or day traders who trade with leverage can also see their crypto portfolios evaporate in a short period of time. But for the medium or long-term investor and trader, a correction is not something you need to fear immediately. Corrections are part of a market cycle.

Market corrections occur regularly in crypto but in most cases these do not lead to a bear market. A common strategy that investors use during a market correction is simply to "hodle" their cryptocurrencies, which means that you hold on to your coins instead of selling them, no matter what.

An alternative to hodling is to set a stop loss. This means that you decide at what value you will sell a cryptocurrency. If you want to know when a cryptocurrency has reached a certain value, but you don't want to sell it right away, you can also set alerts which will keep you informed about the price. You can do this via Tradingview, an online analysis platform.

If you don't like this option either, you can always switch your cryptocurrencies to stablecoins during a correction. Stablecoins are stable in value and are mostly linked to the US dollar. If you transfer crypto currencies to a stablecoin like Tether, 1 Tether (USDT) is always equal to 1 dollar. This means you do not lose money when the market falls and you can easily buy again at a more favourable moment.

Investing during a market correction

Corrections are a setback for many investors and traders. Yet there are enough investors who look at a correction differently. A correction causes prices to drop (sharply). Some investors see this drop as an ideal opportunity to buy additional coins. When these prices rise again, they will have a higher profit margin than investors who have hodled the coin.

But there are risks associated with this strategy. During a correction or bear market, you can invest in a cryptocurrency, but there is no guarantee whatsoever that this cryptocurrency will ever recover from the correction. There is a lot of hype about some cryptocurrencies, as a result of which they rise rapidly in a short period of time. If it turns out that the hype was bigger than the project could ultimately live up to, in most cases such a crypto will not recover. Depending on the project, supply and demand, economic factors, etc. the cryptocurrency will recover and continue to rise.

The super cycle is here.

Make most of it.

Bitcoin has experienced several bull runs and bear markets during its lifetime. So far, it has recovered from every bear market. Currently, Bitcoin has a new all-time high of above $69,000. Almost 3.5 times more than in 2017. Hodlers or investors who bought Bitcoin prior to or during the bear market are all in profit at the moment. Even though Bitcoin recently experienced a correction of approximately 20%, there is no immediate reason to panic. Corrections come in all forms during a bull market. With experience and knowledge, you will be able to judge the value of these corrections more and more over time.

As a reminder; #Bitcoin could even correct to $48-50K and still be bullish.

I'm expecting a lengthening cycle to take place and a healthy correction belongs into that.

Want to know more about cryptocurrencies?

Have a look on our cryptocurrency overview page.