A dApp is one of the most discussed terms in the cryptoscene of 2021. The term which stands for decentralized application gained a lot of name recognition in 2020 and has become very popular in 2021 with applications such as Uniswap, Maker and Aave. Due to the large amount of dApps with various use cases, we will explain in this article what dApps are, what the advantages are of building a dApp and what are the most interesting dApps to follow in the upcoming years. 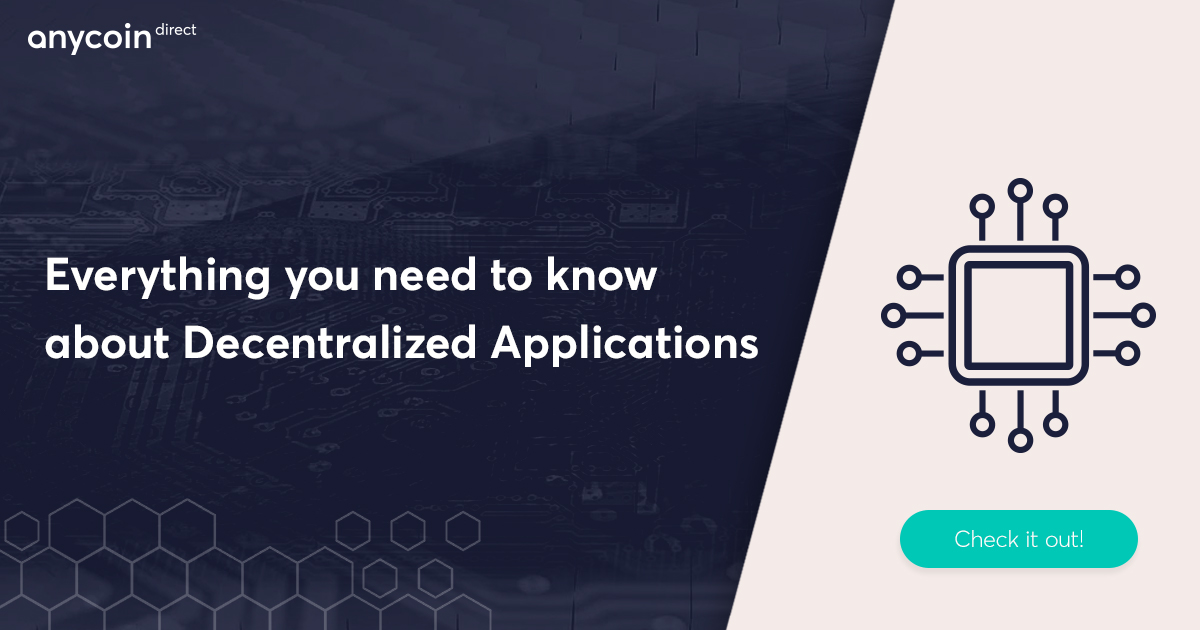 Why would you want to create a dApp?

There are several reasons why, as an application builder, you would want to create a dApp. Firstly, a dApp is fault-tolerant; secondly, dApps prevent internet censorship; and thirdly, it creates greater trust in the system, as dApps are not owned by a single entity. dApps are fault-tolerant because data transactions are always controlled by a group of individuals, never by a single person. The fact that they are controlled by a group of individuals also ensures that censorship is not possible within the network. This is because it is virtually impossible for individuals to manipulate data sets to their advantage. Even government agencies cannot block a dApp due to its decentralized nature. Lastly, users of a dApp feel more confident that their data will not be stolen or manipulated.

dApps have been enormously popular since last year, both in use and value. By value, we mean the coin that is linked to the dApp. As mentioned above in the article, there are hundreds of dApps with different uses. Therefore, we have made a list of dApps that because of their use cases are interesting to keep an eye on in the coming years.

We kick off right away with the highest ranked dApp according to Coinmarketcap, namely Uniswap. The Uniswap platform is a fully decentralised exchange, built in 2018. On the trading platform, you can transact cryptocurrencies peer-to-peer with each other. All these tokens run on the ERC-20 network (tokens running on the Ethereum network). Uniswap is also fully compatible with wallet services, such as Metamask and MyEtherWallet. Uniswap's popularity lies in the fact that users can place their tokens on the exchange without having an account and at no extra charges. You don't have to go through any ID verification, the platform works fast and secure and because of the decentralized nature of Uniswap, everything is anonymous in terms of transactions, etc.

Centralised exchanges are often profit-driven as a result of which you will spend a relatively large amount of money on (transaction) fees. Besides that, as a user on Uniswap you are fully in control of your own funds, in contrast to centralized exchanges where you as a user 'borrow' a private key to be able to use the exchange. By borrowing the private key, the coins are in theory still owned by the exchange. The big difference is that if both platforms are hacked, you will not lose your tokens with Uniswap but you might lose them with a centralized exchange. Uniswap has, since its inception in 2018, grown to a business worth over $9 billion. More than 56 million trades have already taken place on the platform, with a total volume of more than $297 billion by 2021. Uniswap has achieved this within a period of 4 years, an incredible accomplishment. This makes it one of the most interesting dApps to keep an eye on in the coming years.

1/ Following @Uniswap's L2 alpha, it is worth highlighting how far it has come already

Wrote a piece for @DefiantNews breaking down Uniswap’s growth (v1 - v3) and how it stacks relative to CEXs and TradFi: https://t.co/peLLSTgKq5

The blockchain technology on which cryptocurrencies run has many technological applications. Therefore, it is no surprise that game developers have started experimenting and implementing crypto applications. One of these pioneers are the developers of Decentraland. Decentraland began its Initial Coin Offering (ICO) in 2017, in which it raised over $24 million to create a virtual world. In 2019, Decentraland launched a closed beta on Ethereum's network, after which the virtual world opened to the public in February 2020. In the virtual world of Decentraland, as in Minecraft, there is no real objective. Users can buy a piece of virtual land in the world, which is called LAND. On your purchased land you can place content, create applications and experiment with buildings.

Fastening my seatbelt at the @XCOPYART Crash Site, built by the mighty @polygonalmind. Entering a gardened maze of 3D sculpture @MuseumofCrypto, beautifully crafted by @VoxelArchitects. And a stunning marvel of a museum @Cryptoarg_! pic.twitter.com/aLUG7Aza5B

In addition to LAND, there is another currency called MANA. MANA is an ERC-20 token which you can obtain with real money. With MANA, you can get a wide range of items in Decentraland, such as avatars, clothes, names and more on the Decentraland marketplace. Many users of Decentraland currently earn money from their LAND, through leasing, advertising and paid experiences. Other users generate income by making and/or selling objects on Decentraland's marketplace. Over the next few years, it will be interesting to see whether this platform can continue to grow with their protocol. After all, the success of Decentraland has attracted attention, which may lead to competing parties.

The third dApp we will discuss is Aave. Aave is a money market based on the Ethereum network where users can borrow and lend a wide range of digital assets. Aave is one of the largest players in their market. The concept of Aave is the technological equivalent of borrowing money from a bank. Aave allows Ethereum users to obtain cryptocurrency loans or a return on money that the user lends.

🥇 $USDC has the largest liquidity
Followed by $ETH, $WBTC and $DAI pic.twitter.com/yuKbZ8266d

In 2020, Aave took a big hit in the cryptocurrency lending and borrowing market. As a result, the value of the dApp increased tremendously in just one year. Currently, more than $20 billion is being borrowed or lent on Aave's protocol. The company founded only in 2017 - at the time under the name ETHlend - has experienced exponential growth. With more than enough growth opportunities left, this is definitely one of the dApps to keep an eye on in the forthcoming years.

Now Audius is something completely different - a blockchain-powered decentralized music streaming service. Audius' protocol facilitates direct transactions between listeners and creators, allowing everyone to enjoy the freedom to distribute, create and stream audio content. The annual revenues of the music world are several tens of billions of dollars. Despite this, artists keep relatively 'little' money from their music because of management fees, studio time, production costs and marketing. In addition, artists often give up their royalties and copyrights once they sign for a major label.

Thanks to Audius, artists are protected by the fact that the audio streaming service is owned and controlled by the decentralized community of artists and fans. The artists are paid in AUDIO tokens as soon as someone streams their music. Therefore, there are no middlemen in the process. The company Audius is still fairly new, but it is doing something unique with its protocol. At the moment, the total value of Audius is just over $100 million. With Spotify and SoundCloud, it has two formidable opponents when it comes to music streaming services. That is why it is extra interesting to follow whether Audius can compete against these two superpowers in the music streaming industry.

Our final dApp from our list is Augur. Augur is a decentralized market platform, whose protocol is built on the Ethereum network, which is used for making bets. At any time, the bets can be traded at the current market price. Just like the aforementioned crypto, Augur is also managed in a decentralized manner, by users all over the world.

A bet process goes as follows: A user of Augur begins by creating a smart contract. The smart contract is intended to automatically execute and control a legally relevant event and actions, according to the terms of the contract. In Augur, this means that users buy or sell so-called outcome tokens. When the market reaches its end date, users taking on the role of reporters tell them who has won. The winner is automatically paid the earnings. Augur offers low fees, usually between 1-2%. These fees are divided between the market makers and between the users who report the outcome.

Because Augur will run as long as the Ethereum network runs, the blockchain of Augur cannot be shut down, modified or restricted. In addition, due to its decentralized characteristics, Augur cannot be restricted from creating markets or conducting trading activities. Augur's blockchain started in 2015 and over the past six years the platform has grown and developed significantly, which has led to it being one of the leading betting protocols. For this reason, we are very excited to see how far this dApp can continue to develop in the years to come.

dApps have taken an enormous step in their development in recent years. Both the ease of use of the applications and the value of their tokens have increased explosively for many dApps. This development of dApps is very interesting to keep an eye on in the upcoming years, because if they continue this trend, we should not be surprised that many of these dApps will be used by consumers on a daily basis.