Cardano is predicted to have a bright future by many crypto enthusiasts. This enthusiasm has caused several media outlets to label 2022 as the year to be for Cardano. By the end of Q1, it certainly does not seem to be the year of Cardano, and especially ADA, what is Cardano's token in crisis. In fact, ADA's price has been in a downward trend for months and it seems that the hype of the past few years has outpaced the cryptocurrency. 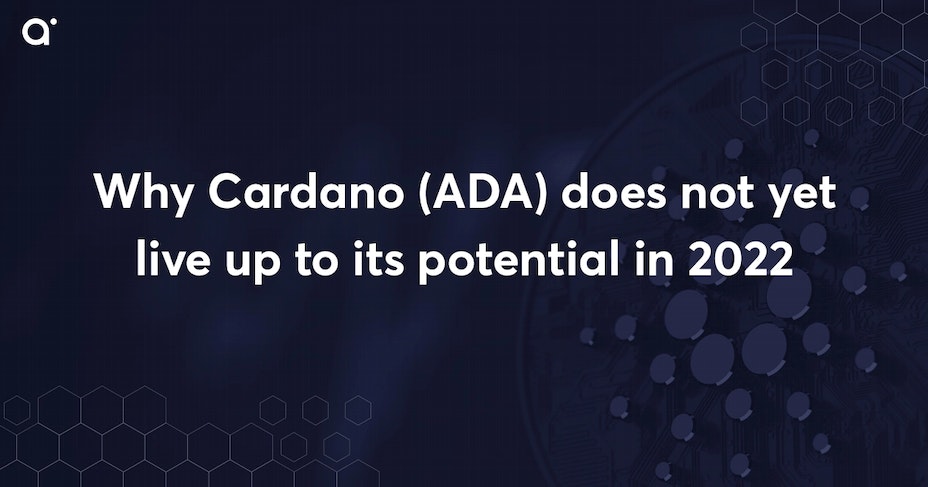 The crypto market is in a downward spiral. According to many crypto experts, we are at the beginning of a bear market. However, despite the fact that most cryptocurrencies decline in value over a longer period, Cardano stands out.

The price of ADA stormed to great heights at the beginning of the 2020 bull run and quickly positioned itself in the top 3 of the most valuable cryptocurrencies. Cardano held this top 3 position for a long time and it seemed to be completely out of the top 5.

The most recent all-time-high was reached by Cardano in early September 2021, when 1 ADA touched the price of $3.10 and the total market value of the coin exceeded $90 billion.

6 months after reaching the all-time-high, things look very different around the price of Cardano. Cardano is currently on its 7 consecutive monthly red candle. This means that at the beginning of a new month the price is lower than the month before. A consistent decline, therefore. No other cryptocurrency in the top 10 can say that they are so disappointing in terms of price.

Where does the FUD concerning Cardano come from?

The huge drop in Cardano's share price does not seem to be solely due to the bear market in the crypto industry. There seem to be several FUD (Fear, Uncertainty and Doubt) factors at play.

One of the frustrations of the Cardano community is the slow release of developments. Charles Hoskinson, founder of Cardano, values accuracy, and reliability very highly. Most cases are reviewed peer-to-peer, which benefits the Cardano network, but slows down the speed of developments.

The developments announced led to rapid price increases, causing many people to experience FOMO (fear of missing the boat) in 2021. This only drove the price up further. When it became clear that the crypto market had reached its climax, all coins fell, but Cardano still seems to be falling relatively harder than others, because they have not yet fulfilled many of their promises.

For example, the community had expected more from the launch of smart contracts. These should have brought Cardano to the same level, if not further, than Ethereum. This proved not to be the case and many investors have put their investments in other projects or have left the crypto market altogether.

Another point of criticism is the many promises that Charles Hoskinson did not keep or did not keep in time. Many people who are involved in cryptocurrencies see the potential in Cardano, but if promises are not kept, the positive sentiment can quickly disappear. Looking at the ADA onchain analysis, you can see a few striking statistics.

From this analysis many people do not yet see Cardano as a project where you invest your money for a long time. There were many developments in the pipeline, but they all came later than planned or have yet to appear. It seems the public does not want to wait too long in this dynamic market for updates and developments. That is why they hold on to coins for a short time, especially if they do not live up to expectations. This way of investing may be partly due to the stinginess of the market. Many people in the crypto market want to make as much money as possible, as quickly as possible.

Despite the fact that Cardano is not yet at the point where many people hoped for, both economically and technologically, there are more than enough leads around this project.

The total amount that people have used to stake their ADA is over $170 million. This strike amount indicates that there is still a large group that does have faith in Cardano in the long term. In addition, Cardano is busy developing various protocols, which will benefit the safety and speed of Cardano.

Looking at Cardano's roadmap, they are working hard on updates every month. The team is certainly not sitting still, and the cryptocurrency is still bursting with potential. However, it should be mentioned that their competitors are also developing further. Just look at Ethereum or Solana, which also regularly come up with new updates.

Still, with Charles Hoskinson as the driver of the Cardano train, it is not a question of, but when Cardano will deliver on its promise. But in the dynamic crypto world, people have little patience and mostly follow the dollar signs. It remains to be seen whether Cardano will deliver on its potential in time, or whether their community and investors will have found refuge in other projects by then.