Cosmos is a promising blockchain that has been called blockchain 3.0. The Cosmos hub is full of developments and the roadmap is ambitious. Upgrades are also planned for 2023. What are the upgrades and how will ATOM's price react to them? 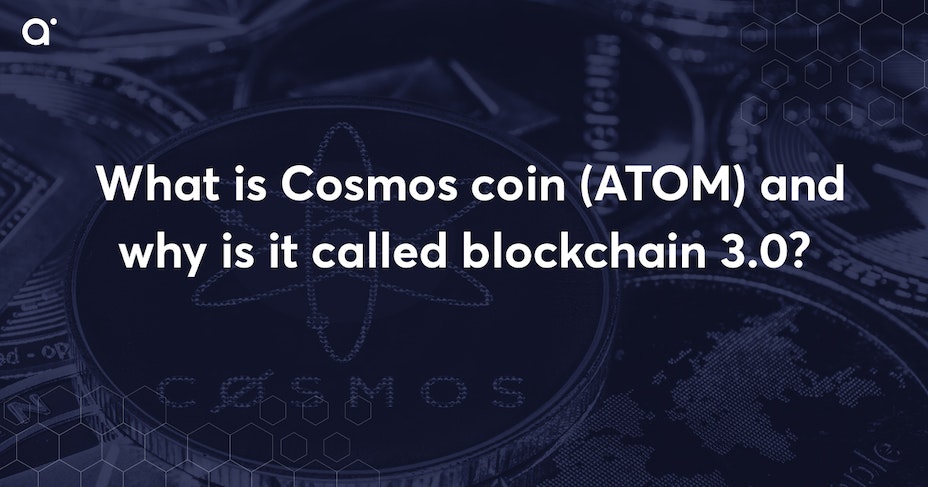 Cosmos is a Proof-of-Stake cryptocurrency and was conceived by the ICF (Interchain foundation) in 2014. In 2016, Cosmos was officially introduced by its owners Jae Kwon and Ethan Buchman. In 2017, Cosmos coin named ATOM was officially launched using an ICO (Initial Coin Offering). An ICO is a fundraising activity that raises funds from investors who want to co-invest in the project. In return, the investors receive ATOM coins.

Cosmos is a blockchain of its own. The organization even calls Cosmos blockchain 3.0. They see problems with the large and well-known blockchains such as Bitcoin and Ethereum and claim that Cosmos is a better version. The Cosmos blockchain, according to its developers, solves several problems that other blockchains face such as, scalability, sovereignty, usability, and interoperability. In particular, the limitations of Bitcoin and its scale problems were reasons for the Cosmos developers to create a better alternative.

In the early years of Bitcoin and Ethereum, their transaction speed was sufficient, but especially in the last few years, the market has grown enormously, leading to more transactions. Because the older blockchains suffer from scalability problems, the transaction speed is low, what’s making it more expensive to carry out transactions.

How does the Cosmos network work?

The Cosmos blockchain uses the Proof-of-Stake (PoS) algorithm, which means that blocks are traced and transactions are carried out by means of strike. The network remains functional through the staking of 'ATOM' tokens. ATOM is the coin that is linked to Cosmos coin and enables the execution of transactions.

Cosmos is a Dual-Layer blockchain, which means that the blockchain consists of two layers. The first layer wraps the network in a generic engine. In other words, the network appears to function without any attention being paid to it, allowing developers to focus on developing applications on the blockchain instead of ensuring that the network continues to work.

The first layer is also called the Tendermint BFT. BFT stands for Byzantine Fault-Tolerance and is, in other words, the consensus algorithm of Cosmos that ensures that blocks are validated and transactions executed. BFT also ensures that the network is protected against malicious parties who try to abuse the network.

Part of the second layer is the Inter Blockchain Communications protocol (IBC). IBC consists of a hub with zones connected to it, making it possible for other blockchains to send tokens to each other.

ATOM coin is the token that is linked to Cosmos. The network therefore needs ATOM to keep functioning. This is done by using the Proof-of-Stake (PoS) algorithm. The network keeps functioning because owners of ATOM coins delegate their tokens to the network. In other words, they make their ATOM coins available to the network for a longer period, thus acting as a validator. A validator checks the blocks and enables transactions to be carried out.

In 2017, through the Interchain Foundation, the distribution of coins was done in five different phases. The five phases are:

ATOM's first price history is known on 24 February 2019. At that time, ATOM coins were trading at a price of $2.75. In this year, the price reached its all-time high of that year on 18 June. Then, the coin traded at a price of $7.02 per coin. Subsequently, the market was bearish. Until early September, Cosmos' price fell rapidly to $2.03 per coin. In the remaining part of the year, the price found a rebound and ATOM managed to more than double in value. ATOM ended the year with a price of $4.25 each.

2020 was a turbulent year for Cosmos. The coin managed to reach an all-time low, but also a new high. According to Coingecko, the price reached a low of $1.16 per ATOM on 13 March. About six months later, a new all-time high was set. On 24 August, a price of $8.47 per ATOM was reached.

2021 was the most exciting year in the short history of Cosmos hub. The crypto market was in a bullrun and the ATOM price managed to benefit from it. A lot also happened around the network. These included several ugrades of the Cosmos hub roadmap 2.0. The roadmap consists of a series of updates that make the platform faster, more scalable and user-friendly. In 2021, the Delta and Vega upgrades were implemented, which included the introduction of a DEX for swapping tokens and the second layer (Cosmos SDK). The upgrades combined with the sentiment of the crypto market at the time, caused the price to manage to rise to $43.83 per ATOM on 20 September. This is an increase of more than 980% from the low point a year earlier. During the rest of the year, the price fell by more than 50%. On 18 December, ATOM was still worth just $21.31 per coin.

The crypto market was very bearish in 2020 due to several external developments. The aftermath of the corona crisis and the war in Ukraine created a lot of selling pressure in the financial markets and thus also in the crypto market. In January, ATOM had another uptrend. Then the price managed to hit the all-time high, but price then fell sharply. By 19 June, the price had fallen to $6.10 per coin. Compared to the all-time high, this is a drop of more than 86%. During this year, many providers faced liquidity problems. Thus, FTX's bankruptcy was announced and a domino effect ensued. Despite the bad developments, Cosmos held up reasonably well and managed to end the year with a price of $9.34 per coin. There was also positive news. The Cosmos hub was also being expanded in 2022. This included an update called the v7-Theta Upgrade. This improved the Cosmos SDK and made the network even more secure with the Interchain Account Module.

The developers behind Cosmos keep coming up with new upgrades. A living roadmap called ' The Cosmos Hub Roadmap 2.0' has been published since 2018 and is still being worked on today.

In 2022, a major update called v7-Theta Upgrade took place on 22 March. The upgrade further extended and improved the second layer of Cosmos hub. Interchain Accounts (IBC) has been integrated, improving functionalities around cross chains and making them more secure.

Four updates are planned in 2023. In the first quarter, the v8-Rho upgrade is expected. The upgrade consists of several updates. These include minor fixes for the Cosmos SDK. There will also be a security fix to pass the composition of the validator set from a Provider Chain (Cosmos Hub) to a Consumer Chain. The validator set produces blocks on both networks using separate nodes. When misbehaviour is detected on the Consumer Chain, cooperation is automatically terminated.

Also expected in Q1 is the v9-Lambda Upgrade. The upgrade consists of updates that improve the governance module, add Liquid Staking and make changes to the reward policy. In Q2, v10-Epsilon upgrade is expected and in Q3, v11-Gamma. There is little info on these upgrades yet and they will be added to the roadmap later.

What the Cosmos price will do in 2023 depends on several factors. Market sentiment is a very important factor. 2023 has started strongly for the crypto sector. The storm of negative news around FTX, Three Arrows Capital etc. seems to be slowly giving way to positive crypto news. BTC rose above the psychological $20k mark in January, and slowly analysts and the crypto world are starting to become more positive again. The word 'bull run' is being bandied about again, so you can definitively say that sentiment around crypto has improved. After BTC, we saw many altcoins rise sharply in January. Cosmos also rose hard in early 2023. In just two weeks, the price rose 30%.

Complementing the sentiment, a number of upgrades are planned for 2023. These upgrades are part of the Cosmos hub roadmap 2.0. In the first quarter, the v8-Rho upgrade and the v9-Lambda upgrade are expected. In addition, upgrades are expected in the second and third quarters. These upgrades could play an important role in the development of Cosmos' price. In our blog on crypto trends in 2023 we also talked about Cosmos. In it, we explained the advantage of the Cosmos hub ecosystem, specifically mentioning the benefit of connecting different blockchains. The addition of the Interchain Security Model could provide a bullish effect.

Of course, this is speculation and therefore one should not take a Cosmos forecast too seriously. As we saw in 2022, sentiment can turn quickly, which is why you should always keep a close eye on news coverage. To get you started, we list some price predictions for Cosmos:

The Cosmos network aims to solve problems that older blockchain such as Ethereum and Bitcoin run into. Sovereignty, scalability and usability are elements in which Cosmos wants to excel. By using tendermint BFT, Cosmos SDK and IBC connection, the network can handle 10,000 transactions per second. In addition, other blockchains can use the network and the transaction costs are only $0.01 per transaction. These functionalities, among others, have ensured that there is a great deal of confidence in the project and the value per ATOM has reached $44.70. Cosmos has released a roadmap that runs until early 2023 and is expected to do four upgrades in 2022. What impact the upgrades will have is hard to say, but that the project continues to develop is a positive observation. Cosmos continues to develop further in 2023, resulting in a number of upgrades they plan to implement.

Despite the positive news, 2022 was a difficult year for Cosmos thanks to external developments, during which ATOM's price fell more than 86%. By early 2023, the crypto sector is in better shape. The word 'Bull run' is falling again and, of course, ATOM's share price hopes to benefit from this. In short, 2023 could be a great year if sentiment around crypto remains bullish and the expected upgrades are successfully executed.