The year 2022 is over and therefore it is time to look ahead at what 2023 will bring. From DeFi adoption to Layer-2 applications, these five crypto trends have the biggest potential in 2023. After the 2021 bull market, 2022 was a hard reality check. Hundreds of projects lost more than 95 per cent of their market capitalization and many completely failed. But have no fear, there are plenty of bright spots to discover-in today's article. Let’s take a look at the top five trends in 2023.

✔️Layer-2 applications and Decentralized Finance’s role will only increase.

✔️The Cosmos network is promising due to it being less 'hackable'.

✔️2022 was a disaster year for cryptogaming. Nevertheless, a lot of future investments have been made. 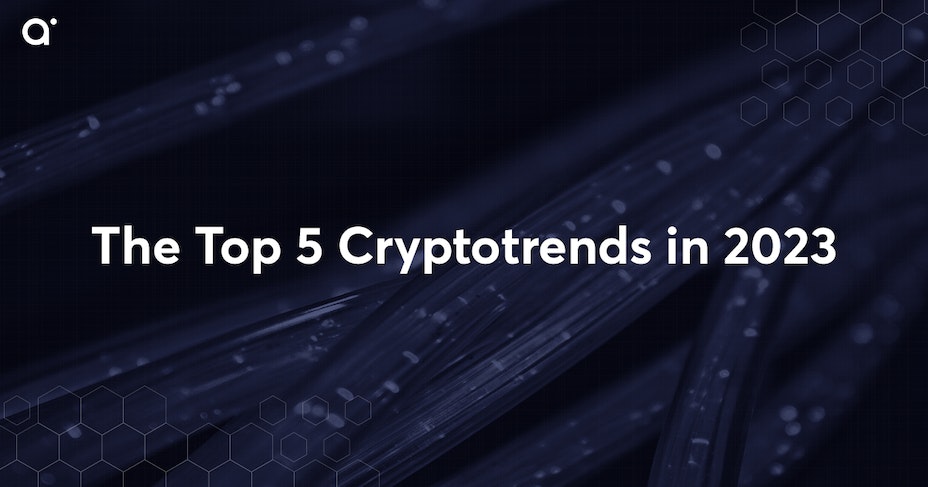 Due to the bear market, Ethereum's transaction costs are a lot cheaper. Currently, a simple ETH transaction costs less than one euro, while a token swap on Uniswap costs around three euros. Although transactions on the Ethereum mainchain are currently cheaper than a year ago, they are still relatively high for most users (and applications).

The situation is different for Ethereum Layer-2 applications (a 2nd layer on top of the Ethereum mainchain) such as Optimism, ImmutableX, StarkWare, Polygon or the Arbitrum network. Transactions on one of these networks usually cost a few cents and in the past 12 months, these ecosystems have developed tremendously. According to Harvard graduate and DeFi expert Patrick Dynamo, the Layer-2 applications Arbitrum and Optimism combined process the same number of transactions as the Ethereum mainchain - and this trend increases monthly.

By 2023, the number of transactions processed by ETH-L2s will only continue to grow. With the Ethereum Shanghai upgrade (and the EIP-4844 included in it), proto-danksharding (yes that's really what it's called) will be introduced in the new year. The upgrade will further scale up the Ethereum mainchain and make transaction costs on Layer 2 networks even cheaper.

It is therefore likely that Layer-2 networks will become increasingly popular in 2023, as many new projects and users can benefit from them. In particular, decentralised applications focusing on social media, gaming and the metaverse will benefit from fast and cheap transactions. We therefore expect many companies to keep a close eye on Layer-2's applications.

The crypto gaming sector faced harsh realities last year after a great 2021. Former pioneers such as Axie Infinity (AXS) or Stepn (GMT) saw a huge drop in the number of players. Many play-to-earn models proved unrealistic and no crypto game went mainstream - will that change in 2023?

According to Drake Star Partners (a tech investment bank), investors have invested more than $3.4 billion in NFT and blockchain gaming companies in 2022. Crypto gaming companies thus account for about 40 per cent of all private equity investments in the gaming sector.

Therefore, it is a logical assumption that these investments will pay off next year. With upcoming releases of triple-A cryptogames, such as Illuvium (ILV), Guild of Guardians (GOG) and Ember Sword (EMBER), for example, it is quite conceivable that one of these games will reach the general public. Former game giant Square Enix is also investing in NFT and blockchain technology, irritating the older ‘hardcore’ fans.

The collapse of crypto exchange FTX has caused a lot of misery in the crypto market. The debris will likely dominate the crypto headlines for months, if not years to come. But even this fiasco has positives, for instance, the importance of having a reliable crypto partner will only become more important for customers. In addition, people will also look at the possibilities of DeFi.

Decentralised Finance (DeFi) has of course been around for some time but will become more popular in 2023 as a result of the FTX debacle. As of 4 November 2022 alone, investors have withdrawn more than US$4.7 billion from crypto exchanges - equivalent to just under 12 percent of all stablecoin holdings on crypto exchanges.

In short, the principles and structures of DeFi platforms do not lead to the same risks that led to FTX's downfall. Given the failure of FTX and other centralized crypto companies, the case for DeFi in 2023 is stronger than ever.

Decentralized social media uses blockchain networks to create censorship-resistant platforms that prioritize free speech and the protection of user data. Thus, they differ from traditional social media mainly because they run on separate servers, unlike centralized servers where one entity is in control.

Decentralized social media platforms also often use NFTs and crypto-tokens as innovative methods to reward content and reputation systems. On decentralized social media platforms such as Lens and Minds, users are given an on-chain reputation that can indicate, among other things, how trustworthy a user is. This way, you can tell more easily who is a bot and who is not.

The Cosmos ecosystem is another trend in the crypto sector that is expected to do many things. Compared to Ethereum or Cardano (other smart contract platforms), Cosmos is much more connected to other blockchain projects.

The big advantage of the Cosmos ecosystem is that any blockchain or decentralized application can be adapted in the Cosmos ecosystem. In addition, tokens can be exchanged between these different protocols without switching between 'bridges', which is more insecure.

Why is Cosmos interesting for developers?

Here's why 2023 could be bullish for Cosmos (ATOM)

However, a major problem for many projects in the Cosmos ecosystem is that they have to make sure that their applications are sufficiently secure and decentralized themselves to avoid falling victim to 51% attacks. This is not the case with other Layer 1 networks like Ethereum or Layer 2 scale solutions like Polygon. The downside of this circumstance is that Cosmos projects often have to spend a lot of capital to validate staking, money they could otherwise use to develop their project.

However, this problem could be solved by 2023. The so-called Interchain Security Model could allow projects in the Cosmos ecosystem to outsource their security instances to CosmosHub (ATOM) at low costs. However, it is not yet clear exactly when the upgrade will go live and how it will work.