For years Litecoin has been known as Bitcoin's little brother. Generally Litecoin is referred to as the 'silver' as opposed to the 'gold' of Bitcoin. Despite the many comparisons to Bitcoin, Litecoin is a coin that stands alone and operates differently in a number of areas. But in terms of market cap Litecoin has not been in 2nd place for some time now. Nevertheless, the coin continues to develop. Therefore we ask the question: is Litecoin underrated? 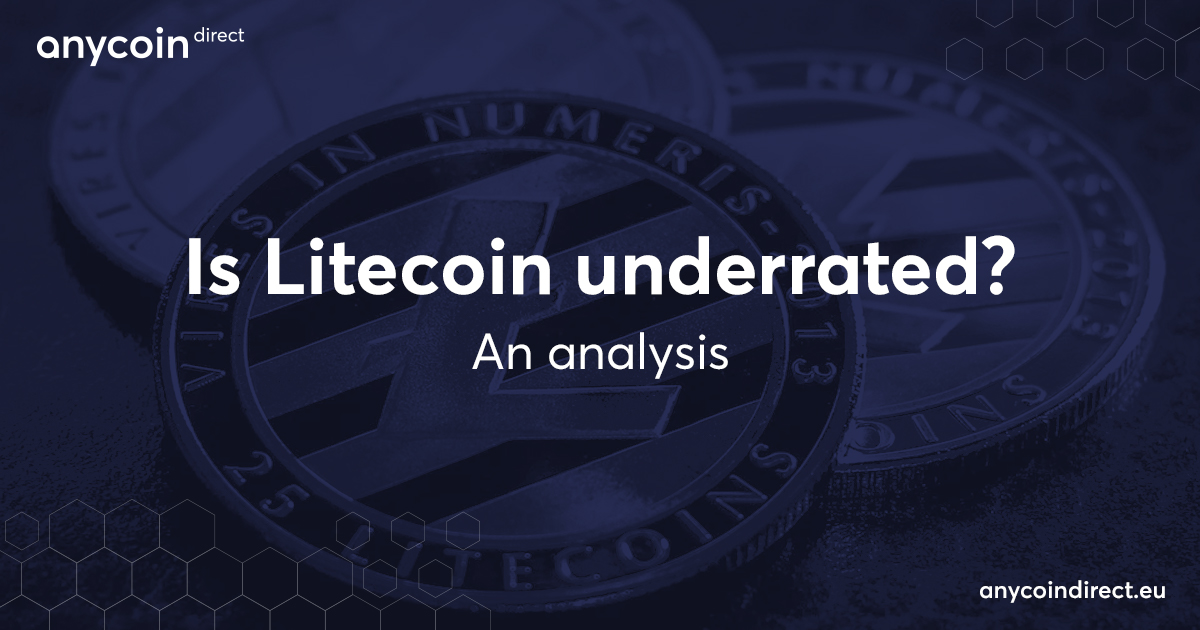 Litecoin was created by Charlie Lee in 2011. The initial goal was to be a lighter version of the Bitcoin created in 2009, hence the "Lite" in the name. Litecoin is designed as a decentralized peer-to-peer network, which allows payments to be made through its own coin called LTC.

For Litecoin users, having their own currency means that they can send LTC to each other all over the world, without the need for a central authority such as a bank to validate the payments. This revolution of decentralized payments was started by Bitcoin, thanks to the development of the blockchain.

Bitcoin and Litecoin are both used as means of payment and therefore have many similarities. Still, BTC is worth many times more than LTC. But is this justified? Here is a comparison between the two crypto currencies.

Transaction times for payments are highly important. You don't want to wait hours for your transaction to be verified. When paying with Bitcoin, you can expect to wait 10 minutes for your payment to go through. This is because Bitcoin takes 10 minutes to generate new blocks on their network. Litecoin does this four times faster, generating new blocks on their network after 2.5 minutes.


However the transaction speeds of Litecoin and Bitcoin still lag far behind when compared to financial companies such as VISA and Maestro. Parties of this size can process thousands of transactions per second.

Bitcoin is currently struggling with transaction fees between $2 and $10. When you want to make small purchases - at the supermarket, for example - this can be quite inconvenient.

Litecoin, on the other hand, has significantly lower transaction fees. Currently, these fees vary between $0.01 and $0.02 USD making the additional costs when paying with LTC almost zero.

Bitcoin transaction fee is 500X of litecoin’s. Think about it! #Litecoin #LitecoinFam

Another advantage that is often underplayed is the fact that Litecoin's founder is still very much involved in the project, unlike Bitcoin's founder (Satoshi), who seems to have disappeared off the face of the earth.

This is due to the fact that people have come to see Bitcoin as a "store of value". The scarcity of Bitcoin – 21 million at most – is expected by the "experts" to increase the value of the coin.

In the bull run of 2017 and early 2018, the situation was quite different. During this time, Litecoin reached a value of approximately 19 billion dollars. The difference with Bitcoin was relatively much lower at the time because Bitcoin had achieved a market cap of approximately 300 billion.

In 2021 the difference between BTC and LTC is much greater and the digital silver seems to be losing out to digital gold in terms of market cap. The idea that Litecoin should surpass Bitcoin has also faded away for some time. People see Litecoin as complementary to Bitcoin rather than a competitor.

It is impossible to predict exactly what the price of a cryptocurrency will do. Thanks to technical analysis (TA), professional investors try to determine the direction of the market as much as possible, but TA remains a guideline and is not something you can simply take for granted.


Litecoin has become one of the most widely used cryptocurrencies in the field of payments. Worldwide there are more than 15,000 ATMs where Litecoins can be withdrawn. Some of which can even be exchanged for cash. These developments have led crypto-experts to be enthusiastic about Litecoin's price prospects.

Litecoin's most recent all-time-high from May stands at roughly $410 dollars per 1 LTC. After this, Litecoin's price fell sharply, partly due to a general crypto correction. Currently, the price of LTC is moving around $180 USD. That is less than half of its ATH. Bitcoin, on the other hand, is once again approaching its ATH.

Litecoin, like most cryptocurrencies, tends to follow the trend of Bitcoin. Should Bitcoin break through its ATH again, there is a chance Litecoin will follow suit.

Litecoin seems to be surpassing Bitcoin in terms of technology at the moment. Nevertheless, in the eyes of crypto fanatics it will remain the digital silver. According to many, it is also unfair to compare Litecoin to Bitcoin as both have different use cases. One is a means of payment. The other, is currently considered more of a store of value.

Buy, sell, swap and store your favorite coins with the the most user-friendly crypto app.