A new milestone for Bitcoin has been reached. The 19 millionth Bitcoin has been mined, which means that 19 million BTC have been put into circulation. An important milestone within the Bitcoin and crypto community. A total of 21 million Bticoin can be mined and it is expected that all Bitcoins will be mined by the year 2140. 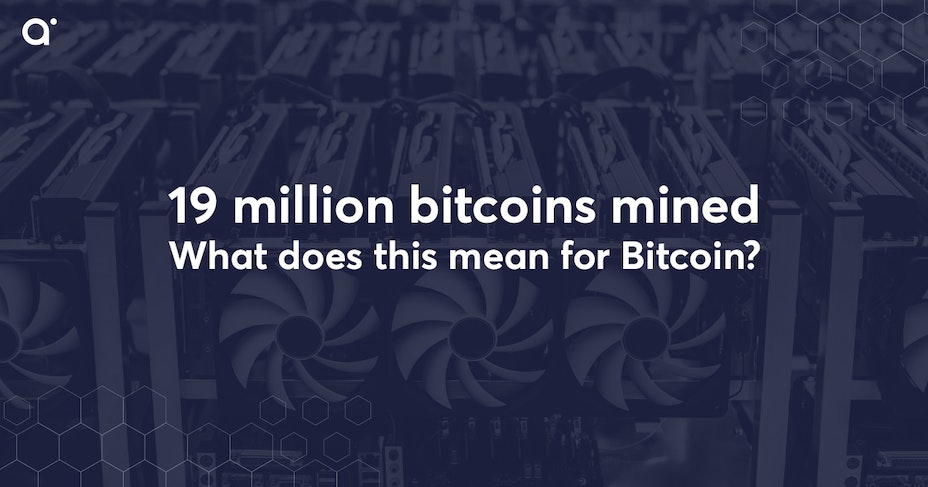 How does Bitcoin mining work?

Bitcoin uses blockchain technology. A blockchain is a database that stores and processes transactions. In order to make transactions, blocks need to be traced. To do this, computers need to use a method that allows them to trace the blocks, but also to approve transactions. This is called consensus and is nothing more than an agreement between users of the network.

Bitcoin uses the Proof-of-Work (PoW) algorithm to track blocks and to approve transactions. The PoW algorithm uses computers to solve complex formulas that allow a new block to be mined and added to the blockchain. As a reward for tracing a block, the miner is paid 6.25 BTC.

What is Bitcoin halving?

As of this writing, 19 million Bitcoins have been mined and the last (21 millionth) BTC is expected to be mined in 2140. Now you may think: how can it take that long for the last Bitcoin to be mined?

If you do the math, you will find out that the last Bitcoin will be mined around 2140.

How did the Bitcoin community react to the milestone?

There are different types of users in the Bitcoin community and they all have different perspectives on the development. For example, the CEO of one of the largest Bitcoin mining companies, Kryptovault, said that there are only two million Bitcoin to mine left, but this does not mean that this is a bad development. The CEO named Kjetil Hove Pettersen believes that the best days are still ahead of them.

On the other hand, there are investors who emphasize that Bitcoin's scarcity is increasing and show in their reaction that the milestone is an important development for the whole network.

The community also sees the combination of increasing Bitcoin adoption, growing demand for Bitcoin and reaching the 19 million supply as a positive development for Bitcoin, which they believe makes the future of Bitcoin look bright.

At Anycoin Direct you can buy Bitcoin within seconds once you log in.