The trading for NFT’s have been declining for five months straight. Since the peak in January, the monthly trading volume have dropped with almost 97%. A quite significant amount. But where certain Ape clubs have not been so popular, Reddit NFT’s seem to be doing a bit better. 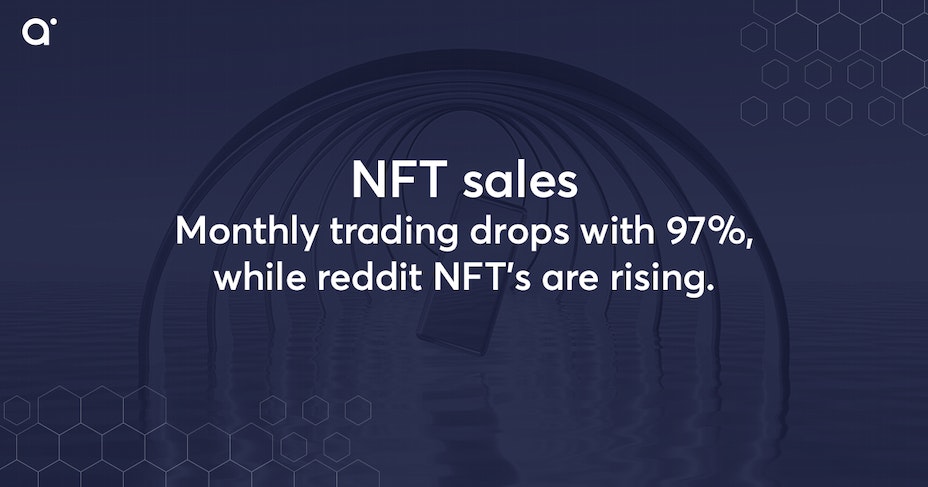 Is the hype around non-fungible tokens (NFTs) over? Falling sales figures at OpenSea suggest that might be the case. In September, the monthly trading volume was just $347 million. By comparison, during the peak of the January-hype, the volume was about 15 times higher at $5.9 billion. These numbers also show how huge the NFT market was during that time, as a monthly trading volume of $347 million is still significant during a bear market.

This can be seen in a chart from Dune Analytics. 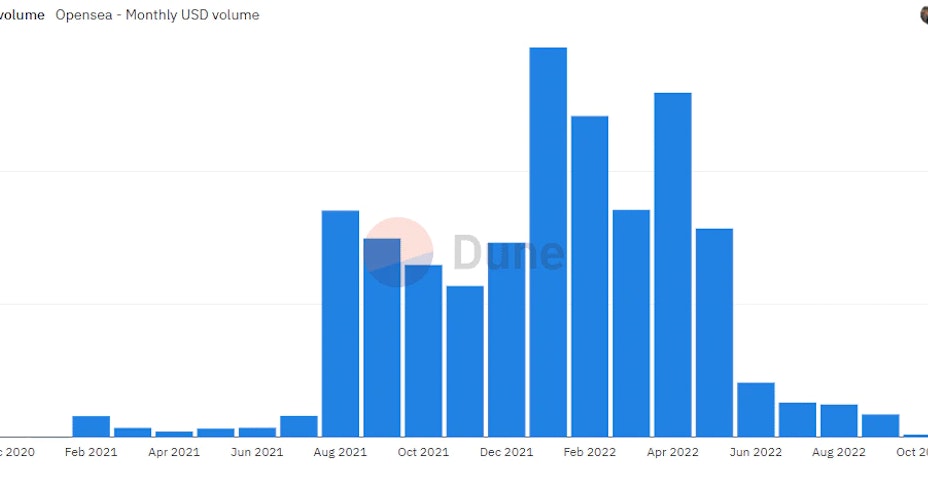 These figures are in tandem with the five-monthly drop of interest surrounding NFT’s. With a lot of negative news mid-year, the crypto market faced a lot of backlash around the month of May. The NFT sales cooled off and the trading volumes dropped from 19 billion in the first quarter of 2022 to 11 billion in the second quarter. In June of this year, a survey among OpenSea users indicated that the vast majority of NFT users (64%) only purchase NFT’s to make money. With dwindling prizes, it is not strange that interest might drop as well, since most people want to ‘strengthen’ their financial position.

Not all NFT’s are doing bad. Although the subject of NFT’s in general is not very popular on reddit, the frontpage of the internet, the avatar NFT’s are steadily winning popularity. Reddit user Warfared made a post where he showcases the volatile price performance of reddit NFT’s in the past months. All these prices can be followed on the trading platform OpenSea.io.

On reddit, users can interact and post with each other. Each profile has a profile picture called an Avatar. These reddit NFT’s consist of unique Avatars created by independent artists worldwide. These NFT’s in turn are minted on the blockchain of Polygon. The NFT’s itself can be seen on OpenSea and can be transferred to multiple blockchains including Ethereum, Solana and Klaytn.

Reddit user Warfared discovered extreme volatility when it comes to reddit NFT trading with some NFT’s seeing price increases of 1000%. The biggest volatility was found on a NFT called Fishy Foustlings #1, which was originally listed for 50 dollars, but got sold for 15 ETH ($20,250). Even though the general opinion of NFT’s is not so popular on reddit, the high NFT prizes is certainly piquing interest. This is also due to the fact that reddit has dispersed some of it NFT’s for free amongst users.

Subreddit /r/cryptocurrency has also been experimenting with it’s own cryptocurrency that can be farmed by posting content. Users receive currency called xMOON ($0.11) by getting karma/upvotes. There are 250 million xMOON’s and are released on a monthly basis to users. When users spend xMOON, it is taken out of circulation. With these xMOON’s, users can also purchase reddit NFT’s.

However, some users have mentioned that the Avatar NFTs are far more expensive with xMOON, then with fiat. For example, one user, u/aroups, wrote:

"If we want Moons to be used for in-app purchases, Reddit should make prices reflect the actual market price and not what they think they're worth. 500 Reddit coins require 200 Moons to be bought while it costs only 2.49€ to buy with fiat. A 10.99€ NFT would probably cost 1000 xMOON ($110)."

Will the NFT market recover?

Most experts expect the NFT market will bounce back in time as the market is currently experiencing a shake-up during an extreme bear market. Data might seem bleak but remember that 400 million is still being traded on a monthly basis. The NFT hype was reaching a point where most NFT’s did not have additional utility. Although reddit avatars are rising, the NFT market is looking for more practical use-cases. Use-cases like gaming, royalties and music are in current development and might bring a resurgence to the NFT market. Let’s wait and see.