Taproot is Bitcoin’s biggest upgrade since 2017’s SegWit. The soft fork update will drastically improve Bitcoin’s scalability, security and will even add certain privacy improvements. The update will also introduce the so-called Schnorr signatures. In this article we will define what Taproot is, when it will launch and how it will benefit the Bitcoin ecosystem. 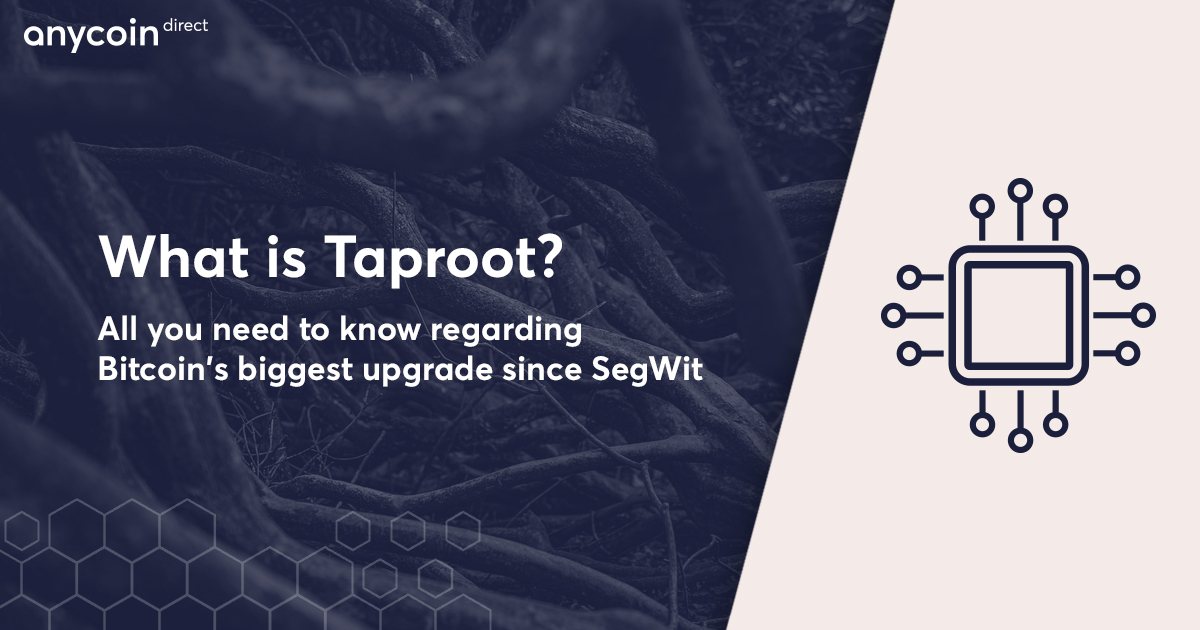 The Taproot upgrade is a soft fork that will improve Bitcoin’s privacy features. How so? Every time you make a transaction on the blockchain, your coins are connected to a script. Multiple lines of code ‘tell’ the blockchain what you (the user) aim to do with the transaction. The most common form of this is a signature, which essentially tells the blockchain that your private key is able to spend the coins. More difficult lines of code could include aspects such as smart contracts or timelocks (waiting periods). Once the transactions are completed they are added to the blockchain, including the scripts (lines of code) that have been used. Sounds good right? Well the problem is that the Bitcoin blockchain has some data issues. More transaction info means more data, which in turn leads to network congestion. The more congested the network, the higher the network fee. The Taproot update will give people the opportunity to bundle signatures into one large public key. These bundled signatures will be merged into one single signature through a protocol called Schnorr (named after Claus Schnorr).

This upgrade will have the following effects:

In addition, Taproot will also add extra smart contract functionalities (yes Bitcoin has smart contracts). Even if you aren’t interested in the technique behind it, most people like the sound of lower transaction costs. The idea was proposed by Gregory Maxwell, a Bitcoin Core developer.

As of block 687284, Taproot signalling has reached 1815 blocks this period, guaranteeing that absent very deep reorgs, it is guaranteed to lock in. Following that, it will activate at block 709632, probably around mid-November 2021. 🥕


Bitcoin upgrades, how are they initiated?

Taproot will be the biggest upgrade since SegWit in 2017. Upgrades to the protocol are scarce and hugely debated due to Bitcoin’s decentralized nature. Whenever a Bitcoin developer wants to propose an idea, he/she must do so through an official Bitcoin Improvement Proposal (BIP). The BIP must then go through three stages namely the Draft stage, the Proposal stage and the Final stage. During this third and final stage, Bitcoin developers must reach consensus, meaning that 90% of them must agree to the proposal. Agreeing to such a proposal isn’t done by simply emailing yes. Developers actually need to signal their agreement in the blockchain itself during a two-week period. With Taproot, the first proposal did not have a 90% agreement rate and had to go back to the drawing board. Two weeks later a new proposal was drafted and got rejected again. It wasn’t until the 12th of June that the 90% approval had been hit. Consensus was reached and Taproot is locked into place. The actual implementation will take place in November of this year.