Looking at your portfolio has not been a pleasant experience these last few weeks. With Bitcoin dropping below €30k and Ethereum dropping below €2k, market sentiments are not extremely positive. But what happened? The end of 2021 was looking great and Bitcoin going to 100K was just a matter of time. There are a multitude of reasons why the market is dropping and there are more than enough reasons to breath in and zoom out. Let’s take a look at some factors why the market is currently dropping. 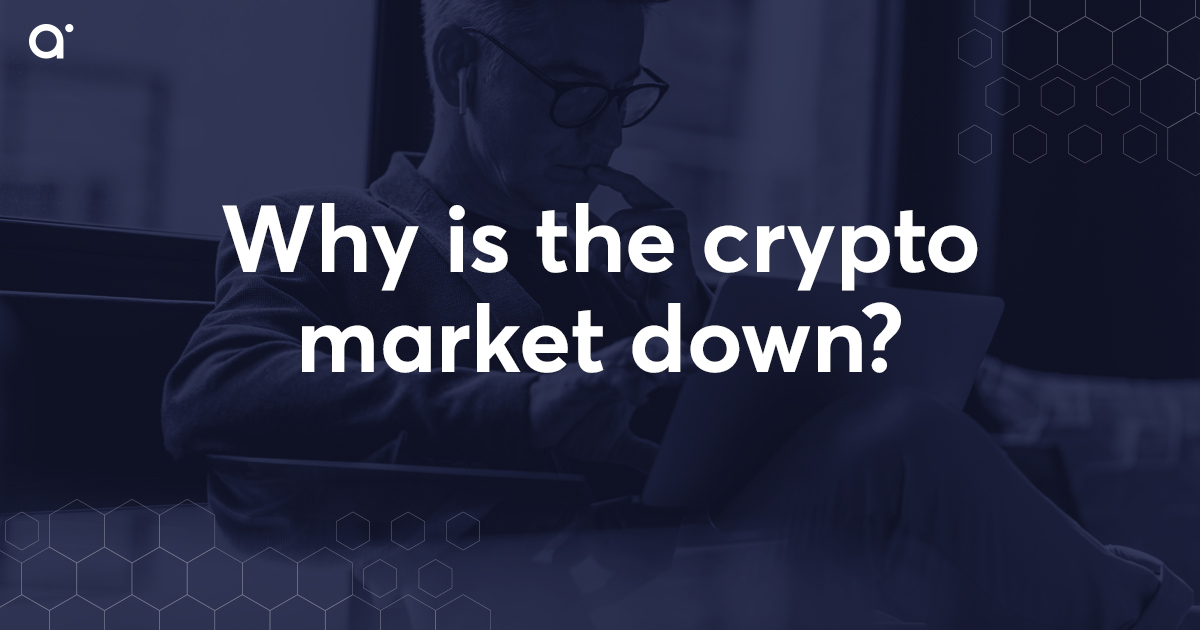 A red weekend turned to a red Monday. On January 24th, the Bitcoin price dropped another 7% in just 24 hours. Even worse, in one week time Bitcoin lost around 23% and is now 50% removed from its all-time-high of €59,716. Ethereum is not doing better, being removed 54% of its ATH. What is the reason for this sudden fall? Let’s start with the most obvious reason, namely all economies are currently dropping.

All global equity markets are currently dropping. Stock markets, oil, futures and crypto alike are dropping as all countries are holding their breath due to the current Russia/Ukraine situation. This international conflict has its grip on the global economy, resulting in a drop across the board. The traditional financial markets are bleeding, which always has an effect on cryptocurrency. To give you some examples, in the past seven days multiple equity markets underperformed:

The last time markets reacted so heavily was during the start of the COVID-19 pandemic. International politics have a huge effect on economical markets. Even though crypto aims to be borderless and decentralized, it is still heavily influenced by traditional markets. Combine that with cryptocurrencies volatility and the situation gets explosive real fast. When things go fast, panic sets in, the price drops, stop losses are triggered and a sharp decline occurs.

Why is the Bitcoin price dropping?

The American federal reserve (the US central bank) had its annual December meeting where they announced to cut back on the bonds they were holding, cut back on printing and raise interest rates to reduce the balance sheet. By increasing interest rates three times (in a short period) they want to dissuade loaning and encourage saving. With inflation rising globally, the American government is taking measures to fight it. At the beginning of 2021, ‘Bond King’ Jeff Gundlach mentioned that Bitcoin got stimulated due to the torrent of Fed money the pandemic brought. He even called Bitcoin ‘the stimulus asset’. With the monetary policy becoming more strict, the torrent will stop.  All these measures are not good for traditional stocks and are not good for cryptocurrency. Al though we would love to see crypto as a decentralized currency, away from real life politics, the truth is that there is an extreme correlation between the Bitcoin price and the global money supply. Inflation rising worldwide? That usually means a drop for Bitcoin and when Bitcoin drops, the rest moves along as well. Interestingly, the Fed did announce that they are currently toying with the idea of creating an American digital currency, a CBDC. This means, that in a few years, the American government could have their own distributed form of cryptocurrency.

This is the 4th time that bitcoin has dropped 50% in the last 4 years.


Russia’s ban on mining and trading

The central bank of Russia has stated that cryptocurrency mining and trading should not only be banned, but that punishment should be induced for those who do purchase cryptocurrency. In a report called “Cryptocurrencies: Trends, risks, measures" they call for a complete ban on the use throughout Russia. The somewhat outdated arguments, don’t go well with prominent fintech leaders in Russia. Telegram CEO Pavel Durov wrote that Russia should focus on regulation and not on banishment, citing that the ban would destroy numerous ‘sectors of the high-tech economy’.

JUST IN: Russia needs to regulate #bitcoin, not ban it. — Russia Ministry of Finance 🇷🇺


Russia is not the first to enact a ban on over-the-counter trading after following countries such as China and Turkey. Reinforcing once more that cryptocurrency is the ‘people’s currency’.

When in doubt zoom out

It is important to mention that Bitcoin has been declared dead 442 times. No seriously, the website 99Bitcoins is keeping track off all the mainstream media mentions of Bitcoin biting the dust calling it ‘Bitcoin Obituaries’. An important phrase is ‘when in doubt, zoom out’. We want to conclude this article with some numbers of high’s and low’s during the (almost) decade that Bitcoin exists. Volatility and using it to your advantage is a key aspect of successful trading. HODL may be a famous cryptocurrency saying but sometimes it is smart to have an exit strategy. And if you truly think that Bitcoin is going down, just take a look at some numbers throughout the years.