Ethereum's most recent upgrade is the 'London' upgrade. This upgrade is intended to help reduce gas fees by burning 2.3 Ethereum tokens per minute. Burning tokens is a phenomenon in the crypto space that occurs regularly. However, we noticed that the concept is not entirely clear to many people. Therefore, we are going to tell you more about what token burning means, how this phenomenon applies to various cryptocurrencies and what the benefits and downsides are. 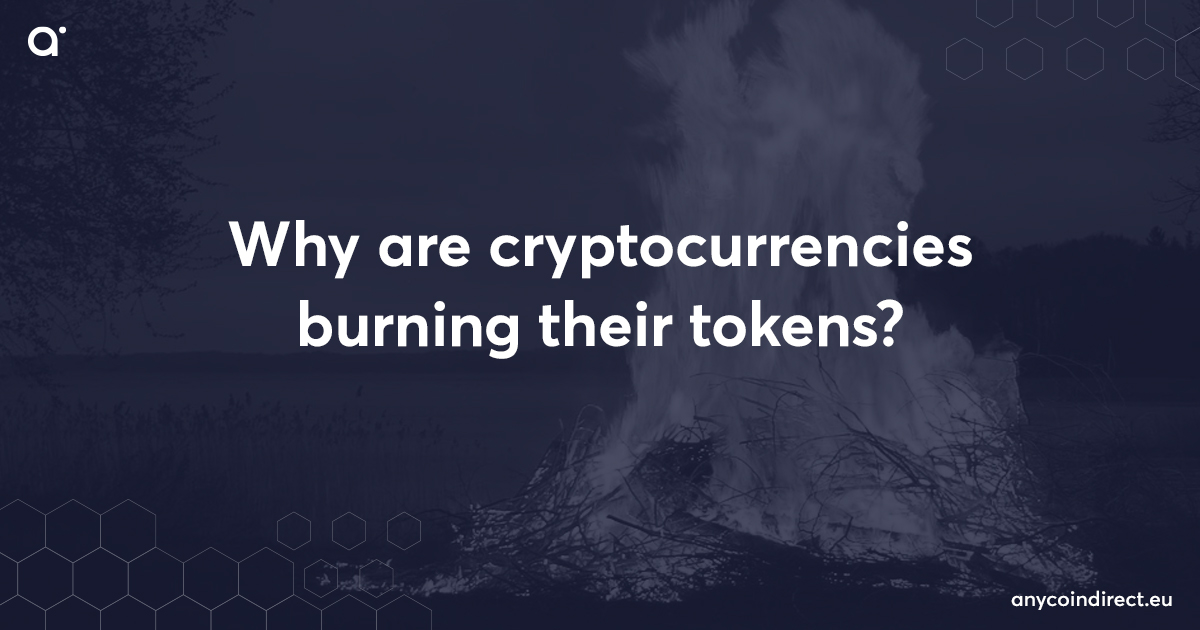 How does token burning work?

Token burning (also known as coin burning) is a process whereby miners and developers of digital currencies remove tokens or coins of the respective currency from circulation. The goal is generally to slow down inflation or reduce the overall supply of circulating coins.

During the burning process, tokens or coins do not physically get burned, since crypto is completely digital. Rather, miners and developers buy up the coins and then send them to specialized addresses, known as burn addresses.

A burn address is a one-way address where there is no possibility to reverse the transaction or withdraw the coins. This is due to the fact that a burn address has no private key corresponding to the address. A missing private key means no access to the coins. Because the coins are now unusable, they can no longer be used for practical purposes. Therefore they allegedly no longer exist and are 'burned'.

Good to see that Ethereum's London Hard Fork has been received well by the market.

There is no doubt that improvements in Ethereum will improve the whole industry.#Ethereum $ETH pic.twitter.com/xvwf8fhjEB

Ethereum's London upgrade went live on Aug. 5 and introduced coin burning on the Ethereum platform. This upgrade is supposed to offer a solution against the unpredictable and sometimes sky-high transaction fees that Ethereum users have to pay. These unpredictable transaction fees are the result of the explosive growth of DeFi - decentralized financial applications that predominantly run on the Ethereum blockchain.

Before discussing the effect of Ethereum coin burning, it is useful to know how it currently operates in terms of transaction fees. Currently, the situation is that users have to bid at what amount they are willing to have their Ethereum transaction retrieved by a miner, which can sometimes be exorbitantly.

Ethereum is trying to counter this problem and has therefore developed a token burn mechanism called Ethereum Improvement Proposal (EIP)-1559. EIP1559 will burn an average of between 2 and 4 ETH on the Ethereum network. At the time of writing, more than 20,000 ETH have already been burned, which has resulted in Ethereum's transaction costs almost halving over this period.

The burning of ETH tokens reduces the supply of ETH available on the market. Eric Conner, co-author of EIP-1559, therefore expects the price of Ethereum to increase significantly, partly due to improvements in ease of use. Meltem Demirors, CoinShares chief strategy officer, even calls it "One of the most significant upgrades for Ethereum since the network's launch."

Other currencies and coin burning

Binance Coin: the Binance coin (BNB) is the official token of the Binance exchange and has been in the top 10 in terms of market cap since last bull run according to CoinMarketCap. BNB holds a quarterly token burn event, of which the 16th took place in July. During this most recent event, 1,296,728 BNB tokens were destroyed, collectively worth just under $400 million.

The remaining 16m BNB unlocked, and moved to a team address, according to the schedule in the white paper.#Binance team has never used or sold a single team #BNB thus far, only burned them.


Stellar Lumens: Stellar Lumens, a non-profit development foundation burned over 50% of its tokens in November 2019. At the time, Stellar Lumens' tokens, XLM, were the world's number 10 in terms of digital assets. The total value of the burned tokens was nearly $4.7 billion. The aim was to make XLM's share price rise and the plan succeeded within a day. The price of an XLM rose by 25% from $0.069 to $0.088 per share.

Stablecoins: even stablecoins such as Tether (USDT), GUSC and USDC have already burned through billions of dollars worth of coins. They do this to ensure transparency when depositing or withdrawing money from their reserves. When money is deposited, additional tokens are created. When money is withdrawn, tokens are burned. In this way, the circulating supply of stablecoin is regulated and the total balance sheet is kept in balance.

As you can read, many cryptocurrencies aim to burn tokens in order to reduce transaction costs, increase the value of the tokens or because stablecoins want to ensure transparency, for example. Burning tokens does not guarantee that the aforementioned reasons will actually have an effect. Nevertheless, burning tokens is more than an interesting concept that benefits many crypto companies and their users.