Cardano's Vasil hard fork was implemented on Sept. 22, 2022. This was one of the larger updates for Cardano to date. This update saw the network gain more capacity and become faster. In addition, it should now be easier for developers to build decentralized applications (dApps) on Cardano. But has this update actually helped? And what about current activity on the Cardano network? 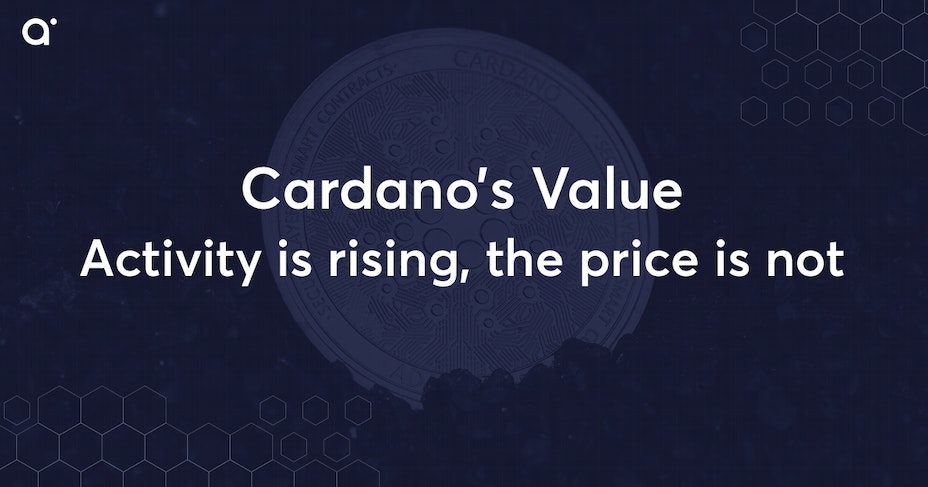 As we wrote in our previous blog, there have been frustrations in the Cardano community that developments are being released too slowly. This is because Charles Hoskinson, the founder of Cardano, values reliability and strictness. All developments are reviewed peer-to-peer, which can take a long time. This benefits the quality of the network, but not the speed of development.

Currently, more than 1,100 projects are building on Cardano and more than 100 projects have already been launched, according to the weekly developer update. These projects range from decentralized exchanges (Dex's) to the Metaverse. Ultimately, they could significantly boost the network and ecosystem. Looking at Ethereum, for example, decentralized applications (dApps) are the biggest reason to use the network. Take Uniswap to trade or Aave to earn interest for example. Looking further into these development updates, we see that the number of projects that decides to build on Cardano is increasing every week. With this number of projects developing on the network, the Vasil hard fork seems to be bearing some fruit and may indeed have made it easier for developers to build on Cardano.

GitHub is a platform that developers use to develop software. It lets people from all over the world work on projects. Cardano also uses GitHub for all kinds of software developments. ‘ProofofGitHub’ is a Twitter account that lists various crypto projects and shows daily developer activity. From this, it is clear that Cardano is very active in terms of developments. For example, on some days there is even twice as much activity as on the Ethereum network.

The total value locked (TVL) is the total value of assets that is been locked on certain protocols. This includes all kinds of DeFi activities such as lending, liquidity pools, as well as staking. Each network has its own TVL. The TVL can be an important indicator for a network in several ways.  For example, the TVL is a good indicator of the size of an ecosystem. In addition, it reflects to some extent the activity on a network. A higher TVL indicates more capital in the ecosystem and thus more activity.

The TVL on Cardano's network at the time of writing is about $60 million according to DefiLlama. This is a drop of around 80% from its peak. On March 24, the TVL was just over $325 million. It has to be said that this value is mainly influenced by the price of ADA. This is because ADA is used in all kinds of DeFi activities on the network. One example is Minswap, where ADA is put into a liquidity pool along with other tokens. Since this drop may not be a realistic picture because of the activity on the network since the value of ADA has so much influence, and ADA has dropped tremendously in value, we can also look at the TVL in ADA. This is about 188 million ADA at the time of writing, whereas at its peak it was about 324 million ADA. So, we can see that this too has dropped significantly as well, but not as much as the dollar amount.

Since the Vasil hard fork of Sept. 22, the TVL in dollars has dropped from about $78 million to the thus mentioned $60 million. The TVL in ADA has increased from about ADA 176 million to ADA 188 million. So, if we again consider the drop in the value of ADA and look purely at the TVL in ADA, it seems as if the updates implemented since the Vasil hard fork are positive. To compare the Cardano network with other major networks, below we list the TVL as of Nov. 30, 22, and the peak of the TVL in the bull market or some weeks or months after.

NFTs on the Cardano network

Looking at the activity surrounding NFTs on the Cardano network, compared to June and September, they seem to be increasing in trading volume again. On Oct. 22, there was even a record number of ADA traded on NFT exchanges on the network, according to OpenCNFT. If we compare this to Ethereum, we can see that the trading volume on the Cardano network around NFTs is much more stable and even shows a big increase in October. On the Ethereum network, trading volume in NFTs has been virtually down-only since May 2022, according to CryptoSlam.

Despite many positive developments on Cardano's network such as the number of projects, trading volume in NFTs, and developer activity, ADA's price does not show much upside yet. However, this could suddenly turn around in a bull market. Perhaps the often used saying in the crypto world also applies to ADA: ‘Bear markets are the best time to build’.