You've probably heard of it and maybe you've come across it yourself or you know someone who has. Companies behind the crypto coins promising that the coin will rise 100 times in the (near) future and influencers telling you to buy these coins. This creates a lot of 'FOMO' (Fear Of Missing Out) around the project, which makes especially starting crypto investors give it a try. In this article, we talk about the characteristics of these projects, ways in which they try to make money and examples of dubious coins in the past. 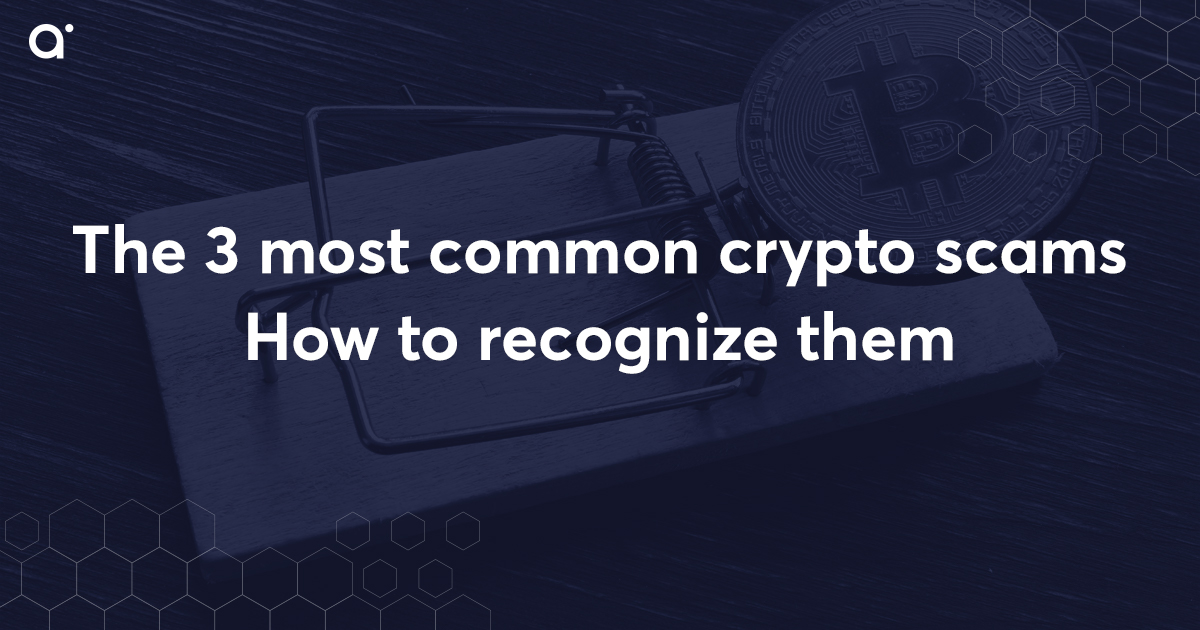 Within the crypto world, there are several ways to get scammed. There are three common scams we will take a closer look at. But first, let's start with why people start a crypto project in order to take other people's money. The answer is obvious: to make money quickly and easily. As a scammer, it is nowadays easier to remain anonymous because you can work entirely online. That is why we often see scammers communicating via Discord and Telegram. Through these online platforms they can remain anonymous and therefore difficult to trace.

Are you one of those who ended up with #shitcoins?

One of the reasons below might be the cause of it.

One notorious scam that is used particularly via social media is the giveaway scam. People often try to impersonate celebrities or influential people on Twitter or YouTube in order to appear trustworthy. Discord and Telegram are also platforms where the giveaway scam is carried out.

The giveaway works as follows: scammers indicate that if you transfer a specific crypto coin to a specific crypto wallet, they will send double the amount of crypto coins back to your crypto wallet. This sounds too good to be true, but still, enough people fall for it and scammers make a lot of money. On Discord and Telegram, the scammers send a personal message. This is often done from a fake account for Cardano or Ethereum, for example. They imitate the account in such a way that it is often difficult to see that it is a fake account. On YouTube, the scammers post a video which often includes a recorded conversation with the founders of the crypto currencies. In this they place their personal wallet with the text that if you send, for example, 4000 ADA (Cardano's token) to the wallet, you will receive 8000 ADA in return.

Another common revenue model of dubious crypto projects is performing a rug pull. You can speak of a rug pull when the price drops by almost 100% in a short period and the developers of the project are responsible for this. Especially the rise of decentralized exchanges (DEX) has made it easier for fraudsters to develop a crypto project with the aim of taking your money by means of a rug pull. Thanks to a DEX it is easy for fraudsters to create a coin and place it on a DEX. Often these coins can be found on DEX platforms such as Uniswap and Panecakeswap. Because there is no central management that screens new coins, it is easy to set up a coin with the purpose of a rull pull.

A rug pull works as follows:

As an example, we use a coin built on the Ethereum blockchain. Scammers create hype around the crypto currency. They often do this by creating a simple website containing a roadmap. Often, these coins are 'marketing' driven and the coin adds nothing to the crypto world other than creating hype around a coin without any long-term strategy. To create hype, famous people such as influencers and YouTubers are often used. Sometimes these people, like the scammers, only have the goal of making quick and easy money, but this is not always the case. Influencers and YouTubers are also often unaware of the scammers plans and really believe in the project. In this way, the scammers take advantage of the status of YouTubers and influencers. When enough money has been invested in the currency, the scammers remove the liquidity by withdrawing all Ethereum from the project. The value of the currency often drops by 100% and investors can no longer sell their coins.

#RugPulls will continue as people drop money into anonymous projects that tug at our emotions. Anon charities, music sites w/ attractive people on it, promises of getting rich… 🚩

An anonymous team cannot be prosecuted.

Nowadays there are also NFT scams. At the moment, NFTs are hot and we hear many success stories about NFTs being sold for tons. It is therefore tempting to trade NFTs yourself. YouTubers will indicate that it is smart to get involved in a project before it is launched. You can do this by joining the project's Discord group and being active, which gives you a chance of being whitelisted. When you are whitelisted, you get the chance to 'mint' an NFT of the project during the launch. This is exactly the part that scammers try to use. We know two ways of NFT scams, namely an NFT rug pull and a discord scam where people pretend to be part of the project.

With a discord scam, the scammers are also participating in the project, and they know that you are also a participant. They send you information about the project in a DM (personal message). Often it says in the message that you have been whitelisted or that the pre-sale has started, and they try to send you to a fake website that looks like the official site. They tell you that you can connect your personal wallet here and start minting NFTs, but actually when you accept the 'smart contract' you send the mint fee to the scammers.

The NFT rug pull is comparable to a rug pull on a DEX platform, but it works a bit differently and has different characteristics. What they actually do with an NFT rug pull is announce a project and try to hype it up, ultimately ripping off the investors. Often these projects have big plans and look a lot like official and reliable projects. Therefore, it is important to pay attention to different aspects before investing in the project. When can you consider a project as NFT rug pull?

A third variant is not necessarily a rug pull, but it is a form of fraud:

There are a number of characteristics that may indicate that a project is a rug pull. How do you recognise a possible back pull?

In the past, there have been several (successful) projects where investors lost their money to scammers.

Although many people have made money from Xpose Protocol, we can conclude that Xpose Protocol is an example of a classic pump and dump coin. Xpose Protocol calls itself a marketing-driven coin and was much discussed in the summer of 2021, especially in the Netherlands. Famous Dutch rappers, influencers and a football manager were said to have invested in the coin. Later, it turned out that these influential people were actually involved in the project, but in all likelihood benefited from the pump and dump. We therefore quickly saw the price fall very sharply in a short period of time.

Another example of typical hype-driven crypto currencies are the many Doge, Moon and INU variants which try to mimic successful coins such as Dogecoin, Safemoon and Shiba INU. What we see a lot is people counterfeiting tokens that are similar in name to 'meme' coins like Shiba INU and Dogecoin. They hope to create hype around the coin. There is not necessarily a malicious intent behind this. However, hype-driven coins are very risky, as there are no clear and ambitious strategies and plans behind them.

One of the most popular series of 2021 was the Korean Netflix series 'Squid Game'. At the end of 2021, hype arose around the series, which clever scammers took advantage of. The scammers created a crypto currency called Squid Game and performed a typical back pull. In the video, a YouTuber shows how quickly and effectively the rug pull was performed. Initially, we see the price rise sharply, while investors were unable to get their money out. The fraudsters then took out all the liquidity.

The crypto world has many good stories, but unfortunately, we also have to conclude that the crypto world can be a goldmine for scammers. In particular, the giveaway scam, rug pull and NFT scam are currently common scams. It is therefore important for crypto investors to look out and do enough research before investing. Fortunately, most of the characteristics of the scams are often easy to recognise. Especially if you know what to look for. As a result, your investments run much less risk of falling into the hands of malicious persons.