Ever since UST lost its peg to the dollar last year - while Do Kwon and the Luna Foundation Guard tried to defend it with any means necessary - there has been a lot to do around stablecoins. Several other stablecoins have since (briefly) lost their pegs. For years there have been rumors about Tether's reserves and that they were engaging in fractional banking. Although the concerns seem a little less now than in May 2022, a hot topic remains hanging over the crypto industry. Are stablecoins really that stable? And which stablecoin do you choose exactly? 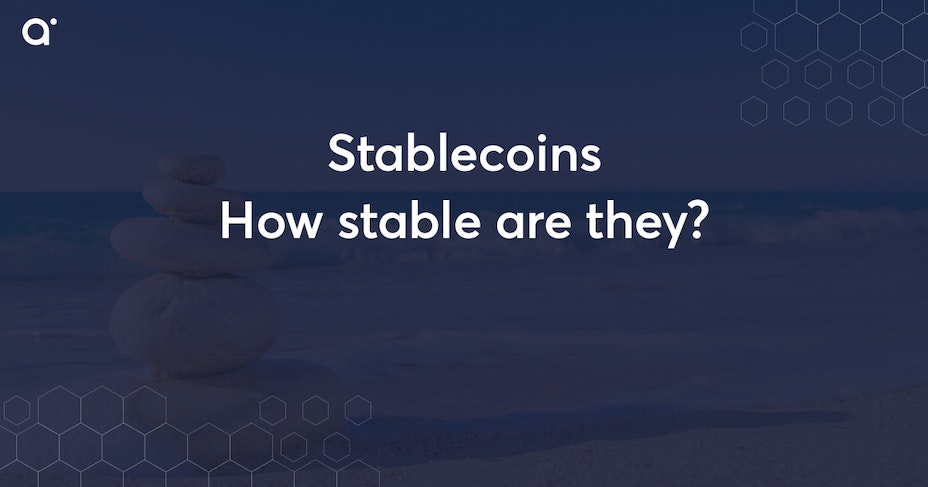 Stablecoins are coins linked to a particular asset. This can be a fiat currency such as the Euro or the Dollar, but can also be a commodity, precious metal or other cryptocurrency. Stablecoins, as the name might suggest, should be stable to the linked financial instrument. For example, USDT, USDC, DAI, etc. should have a value of $1 and EUROC or EURt should have a value of €1. These stablecoins are a way for traders to (temporarily) avoid volatility in the crypto market. For example, when you expect Bitcoin to fall, you can sell it for a stablecoin. When you expect a rise, you sell the stablecoin again for Bitcoin or any other cryptocurrency. Stablecoins can be issued centrally by companies such as Tether or Circle which provide the peg, or decentralised by protocols such as MakerDAO (DAI) or Terra Luna (UST) which then rely on smart contracts.

What stablecoins are there?

USDT is the oldest, largest, but perhaps also the most controversial centralized stablecoin. USDT is issued by Tether. Despite Tether's claim that all reserves are held 1-to-1 in dollars, there are many doubts about this. These doubts are fuelled in part by its lack of transparency and the fact that its owner (iFinex) is based in HongKong. Many experts have spoken out against Tether because of this, but to date USDT has (with a few exceptions) always maintained its peg to the dollar. During the fall of UST, Tether processed user exchanges for more than $7 billion. With this, according to Paola Ardoino (CTO of Tether), they have proven that they provide solid services. However, USDT exchanges at Tether are not without cost; the minimum order size is $100,000 and the transaction fee is $1000 or 0.1%. So the $7 billion Tether swapped during the fall of UST made them quite a bit of money.

Besides USDT, Tether also issues other stablecoins. For instance, they have issued EURt (EURO) and CNHt (Chinese Yuan). Although these are a lot smaller in terms of market capitalisation - and many times less traded - it is an interesting development to keep an eye on for traders.

Tether has also issued a stablecoin linked to gold. This is the stablecoin XAUt (or Tether Gold). This allows one to purchase gold on the blockchain while Tether ensures that physical gold is kept in exchange. At the time of writing, Tether has over 7500 kilograms of gold to back the XAUt tokens.

USDC is the second largest stablecoin and is issued by Circle, a company licensed in the state of Ney York. Through USDC (and EuroC), Circle aims to provide money at internet speeds. Circle has all kinds of partners such as Visa and Mastercard and is one of the best-regulated stablecoins in the market. This makes Circle transparent, but regulation also makes it cooperative with regulators. This may be a reason for some not to use USDC (and EuroC).

Paxos is a regulated company active in financial technologies, developing infrastructure for digital assets. Among other things, Paxos works with Paypal to build crypto products. Paxos issues USDpaxos (USDP), as well as BinanceUSD (BUSD). Both are regulated and approved by the New York State Department of Financial Services (NYDFS). USDP and BUSD can be exchanged for dollars at any time. Paxos' holdings are audited by a third party to ensure that all every dollar could be paid out. Like Tether, Paxos also issues a token linked to gold: PAXG.

UST was the main algorithmic stablecoin linked to the Terra (Luna) ecosystem. Through the minting and bursting of Luna, the stablecoin UST was created. Where UST quickly skyrocketed in market capitalization and grew in adoption within the crypto industry, the coin began to lose its peg to the dollar on 9 May 2022. The mint and burn mechanism as implemented proved not to work well enough. Within weeks, the coin dropped from the $1.00 peg to $0.01. At the moment, UST lives forth as USTC (UST-classic) and sits at around $0.02. The market capitalization has fallen from a high of $18.7 billion to $230 million and the market is one (pegged) algorithmic stablecoin poorer.

DAI is also a decentralized stablecoin linked to the dollar. The coin is created through the Maker (MRK) system. DAI, according to its developers, should be available to anyone at any time, anywhere. It is freely tradable and it should be possible payment method. Anyone can create DAI by making other assets such as (W)BTC, ETH or other coins available as collateral. These assets are then the collateral for the DAI coins and should always be worth more than the DAI. Whereas in its early days DAI had some problems maintaining the link, in recent months it has been very stable.

Frax is a stablecoin that is partly backed by collateral (cryptocurrency) and partly held in place algorithmically. Frax can be created if a user provides $0.50 in Frax and $0.50 in another cryptocurrency. The Frax Protocol aims to create a highly scalable, decentralised currency. Attached to Frax are Frax shares (FXS) which, among other things, shares in the transaction costs.

USDD is a decentralised dollar stablecoin that - despite its guarantee ratio of over 200% - trades for $0.97 at the time of writing. So the peg is somewhat below its intended value. The Tron DAO is the issuer of USDD and ensures price stability. The protocol aims for USDD to be the most stable, decentralised and freeze-free stablecoin within the crypto industry. USDD can be used not only on Tron's network, but also on Ethereum and the Binance Smart Chain.

USDN is an algorithmic stablecoin based on the Waves ecosystem. However, the link USDN is supposed to have with the dollar has been missing for quite some time. In recent months, the coin has been trading heaps below the dollar. At the time of writing, the rate is even around $0.35. So caution is advised when investing or using this 'stablecoin'.

xUSD is the algorithmic stablecoin of the Haven Protocol. The Haven Protocol is a privacy-focused protocol based on Monero's technology. This makes it perhaps the most innovative algorithmic stablecoin. xUSD - the protocol's dollar stablecoin - can be created by burning Haven (XHV), the protocol's native coin. The developers behind Haven consider privacy extremely important. Besides xUSD, other stablecoins should also become available such as xEURO and xCNY (Chinese Yuan), as well as precious metals such as xAU (gold) and xAG (silver). Despite the fact that the stablecoin xUSD should be worth around $1, this coin has been hugely below this intended peg for a long time. xUSD has long hovered around $0.30 and is currently at $0.55 at the time of writing. Although developers are trying all kinds of developments to bring xUSD back to this peg, it is still struggling. This should change with Haven 3.0 and will definitely be a development to keep an eye on.

All stablecoins put together have a certain value. This is called the market capitalization. This market capitalization of stablecoins can be an indicator you can use when determining the moment of entry into the market. When the amount of stablecoins is large compared to the value of the cryptocurrency market in general, there may still be a lot of money along the side to enter (dry powder). When the amount of stablecoins is smaller relative to the whole market, most may have already bought cryptocurrencies and the top could have been reached. 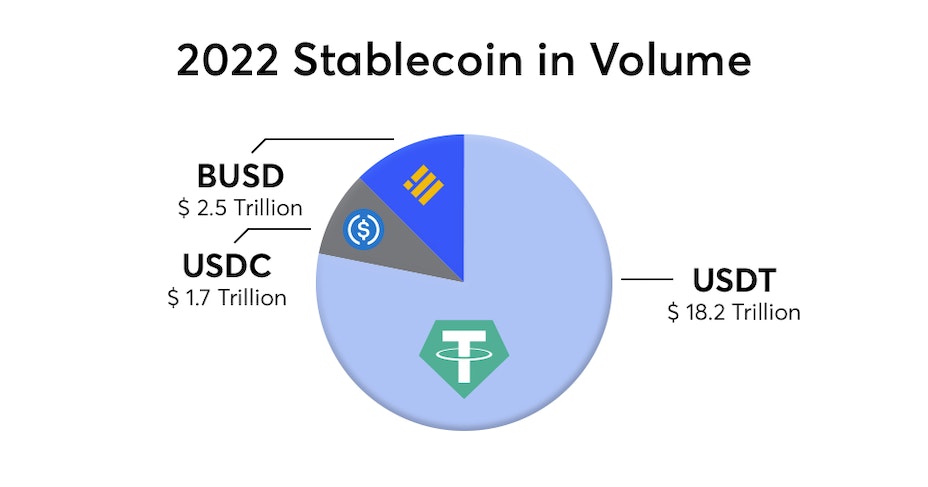 It may happen that a stablecoin loses its linkage to the intended financial instrument. For instance, instead of $1, USDT or USDC may only be redeemable in the market for $0.95 at a given time. This is called the 'depeg' or decoupling. Investors at that point are not confident that the coin can be redeemed for $1,- at the company Tether or Circle, causing the value to fall.

If, as an investor, you do feel confident that the peg will recover, it can be an opportunity to buy. However, this was also a strategy many investors used when UST decoupled. Where many thought they would make some quick money as the peg would recover, it never recovered. The price of UST currently stands at $0.02, which meant that many investors lost almost all their money. Whereas with USDT, the peg has always recovered, there is always a risk of things going wrong. 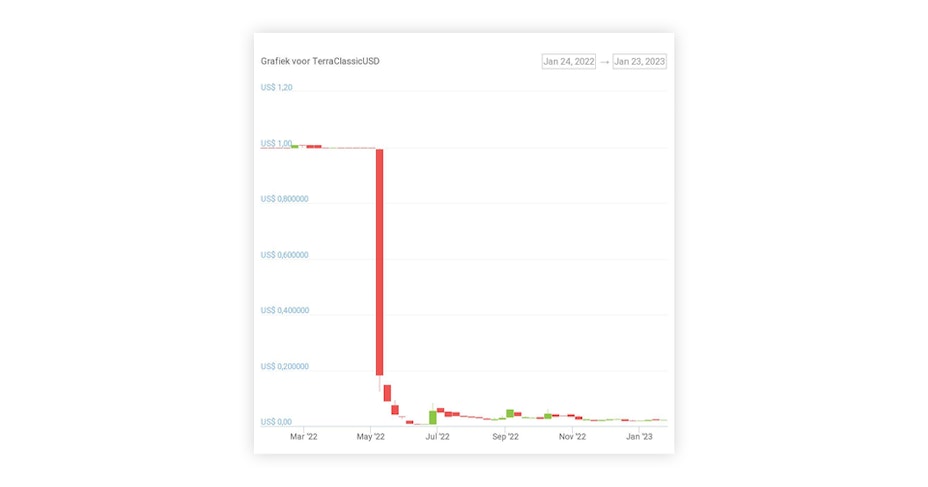 There are several ways to earn returns on stablecoins. However, these methods are not risk-free. Because, with return comes risk. As we discussed in our blog on ' Bear Market & Buying Strategies', providing your coins to liquidity pools is an option to make returns.

Besides using liquidity pools, there are ways you can lend out your stablecoins (lending). Both centrally, and decentrally. However, many central parties have collapsed or are in dire straits in the last year. BlockFi, Voyager and Gemini earn are no longer options. Still, there are decentralised protocols on which returns can be made in stablecoins. Aave, Compound and MakerDAO are possible failure bases for these returns where the percentages are usually a few percent per year.

Risks stablecoins outside the crypto industry

Since UST lost its peg to the dollar, there have been many casualties. Voyager, BlockFi, 3AC and FTX have toppled and Digital Currency Group is in big trouble. The US Federal Reserve has warned about the risk of stablecoins to the US economy. Eswar Prasad, a professor of economics, issued this warning. Since the issuers of stablecoins claim to have US government bonds as collateral, these will have to be sold in large-scale redemptions of stablecoins. Since the US bond market is currently fragile, according to this economics professor, this could create an amplified effect in the market due to low liquidity. The failure of large stablecoins could therefore be a risk not only for the crypto market, but even for the entire US economy. Due to this risk, further regulation of these issuers in the future cannot be ruled out.

To dodge the volatility of cryptocurrencies for a while, stablecoins can be a solution. However, both centralised and decentralised stablecoins carry the necessary risk. For the individual user, but also for the whole economy, says Eswar Prasad. If you want to get out of the market for a longer time, swapping to real Euros or Dollars might be a choice with less risk.