When people think of crypto, they immediately think of huge price fluctuations in which investors make enormous profits or losses in a short period of time, but crypto is much more than just a money source. Cryptos are technological innovations of the now and the future. More and more crypto’s are getting applications that are already being used by companies and users or will play a major role in the future. In this article we will therefore take a look at the most anticipated crypto's and their use cases. 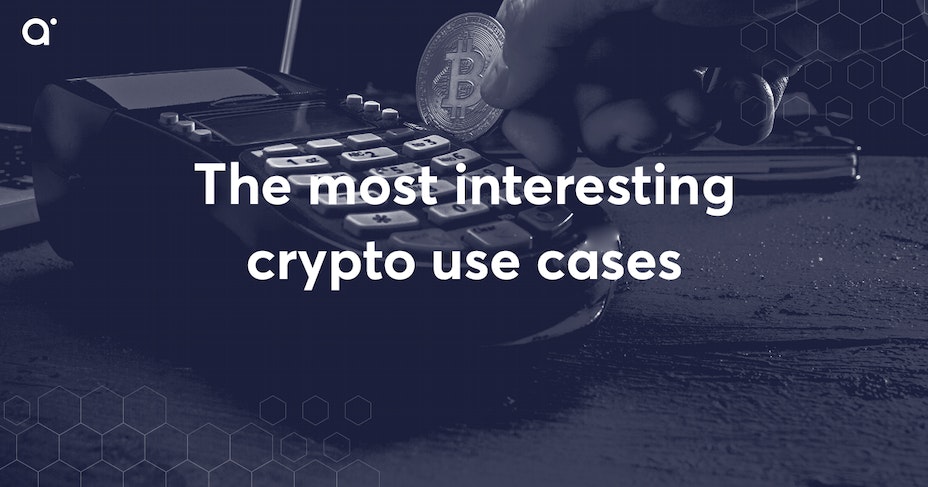 We start with Bitcoin as it is the number one cryptocurrency in the world in terms of market capitalisation. Being the very first cryptocurrency, Bitcoin is getting a lot of media attention, is the most popular currency for many and has a huge community. In addition to being a means of payment, Bitcoin is also seen as a "store of value".

The idea of Bitcoin was written down in a white paper in 2008 by a person or group under the pseudonym "Satoshi Nakamoto". It described that Bitcoin was conceived to make online payments possible for anyone, anywhere in the world, through peer-to-peer transactions. Peer-to-peer means: directly with each other without an intermediary like a bank. In 2009, the first BTC, Bitcoins native token, was mined on a computer.

13 years later, Bitcoin is a well-known commodity around the world and more and more people are paying for goods and services with BTC. Physical and online wallets and exchanges have made it increasingly easy to buy and store bitcoins independently of traditional banks and institutions. Anyone with a phone or laptop and an internet connection can buy, sell and trade Bitcoins. Furthermore, someone from Europe can easily transfer BTC to a BTC address of someone in Africa. Something that is much more difficult to achieve with traditional money, since many Africans do not have a bank account.

Bitcoin was initially conceived to enable online payments for everyone, but it is increasingly establishing itself as a so-called "store of value" like gold or silver. For this reason, Bitcoin is often called "digital gold". In fact, Bitcoin is seen as something that is becoming more and more valuable because there is more and more demand for Bitcoin, while there is less and less supply. This is because up to 21 million BTC will be released into the market. Of these, 19 million are already in circulation. So only 2 million more BTC will be coming onto the market. Of the maximum 21 million BTC, millions were lost in the first years of Bitcoin's existence. This is because people were less careful about storing BTC because Bitcoin was worth much less and the storage methods were more time-consuming. The fact that Bitcoin is the first cryptocurrency and that its scarcity is only increasing due to the growing demand, has led to Bitcoin having the tremendous value it has today.

Ethereum has been in second place in terms of market capitalisation for years and is a decentralised open-source blockchain whose native token is ETH. In addition to having a market capitalisation of over €200 billion and almost €2000 per ETH, Ethereum also has an impressive number of use cases. For example, most dApps (decentralised applications) run on Ethereum's blockchain. From these dApps, great things like DeFi and NFT marketplaces have emerged.

Thanks to the development of dApps, DeFi (decentralised finance) applications can be developed. These DeFi projects make it possible that one can store, stake, trade, etc. money without an intermediary like banks and institutions. In other words, you are in charge of your own assets in a decentralised way. For this reason, DeFi has grown enormously in popularity in recent years, which can be seen from the enormous rise in the price of many DeFi projects. So far, most successful DeFi projects such as MakerDAO and Uniswap are running on Ethereum's network.

Thanks to the use of smart contracts, it is possible to exchange assets through the Ethereum network at high-speed. This is safer and faster than via a traditional bank, as there is no intermediary and as smart contracts ensure that transactions are carried out under certain pre-agreed conditions. So if you buy a football ticket from someone, you buy it directly from them, provided certain conditions are met. The transaction fees are currently relatively high compared to competing blockchains, due to the gas fees. Ethereum is going to tackle this problem by switching from a Proof of Work to a Proof of Stake consensus mechanism. This transition is planned for Q3 or Q4 2022.

Ethereum is a project that has been in development since 2014. In these years, it has developed into a platform on which many applications can be developed. Various applications such as securing the internet infrastructure, building health applications, linking digital identities, creating dApps, making political votes fair, and storing data are just a few examples of the kinds of applications that can be built on Ethereum's blockchain.

Solana, like Ethereum, is an open-source blockchain that supports smart contracts, NFTs, dApps and DeFi, among others. In addition, Solana's network is lightning fast thanks to the innovative combination of the Proof of Stake and Proof of Histroy consensus.

Ethereum is known for its numerous large DeFi and NFT ecosystems, and Solana is working hard to achieve the same status. Since Solana's network supports smart contracts, developers can easily build dApps. This has led to a series of large DeFi and NFT marketplace projects being developed. These DeFi and NFT projects have integrated their own ecosystems into the Solana ecosystem. The Solana blockchain has grown enormously in popularity in 2021 and this appears to be giving the ecosystem a further boost.

Tether is the crypto company behind the cryptocurrency USDT, the biggest stablecoin by market capitalisation (over €65 billion). The USDT is 1:1 pegged to the US dollar and is one of the most traded cryptocurrencies by volume each day according to CoinMarketCap.

pegged to US dollar

USDT is a stablecoin which means that the value of a single USDT is always pegged 1:1 to a fiat currency. Fiat currencies are currencies like the euro, dollar or Chinese yen. Tether created the USDT to eliminate the high volatility of cryptocurrencies by developing a crypto that consistently maintains the stable value of the US dollar. This allows investors to quickly, easily and securely exchange their other cryptocurrencies for USDT and vice versa. In particular, traders who want to swap quickly between volatile cryptocurrencies make extensive use of USDT.

Polygon, like Solana, made its big breakthrough to the general public in 2021. The company, which launched in 2017 under the name Matic Network, is a technology platform that connects and scales blockchain networks.

Polygon's use case is a little more technical than previously mentioned cryptos. The Polygon platform works using the Ethereum blockchain, connecting Ethereum-based projects. Using the Polygon platform can increase the flexibility, scalability and sovereignty of a blockchain project, while still providing the security, interoperability and structural advantages of the Ethereum blockchain. Simply put, Polygon enables communication between Ethereum and other blockchains, which has earned Polygon the nickname "Ethereum's internet of blockchains". The platform now supports more than 7,000 blockchain-based projects.

The Polkadot protocol is designed to allow unrelated blockchains to communicate securely with each other, allowing digital assets or data to be exchanged between, for example, the Ethereum and Bitcoin blockchains without an intermediary. In addition, through the use of parallel blockchains (parachains) that take over much of the processing demand of the main blockchain, Polkadot is fast and scalable. Where Polygon connects blockchains on Ethereum's network, Polkadot does so with blockchains from various networks.

Fantom is an open-source decentralised smart contract platform for dApps and digital assets that was created as an alternative to Ethereum. Older blockchains still often lack scalability, security and decentralisation. Fantom aims to overcome these limitations.

Like Ethereum and Solana, Fantom is a blockchain platform that supports smart contracts. The application of smart contracts has made Fantom an interesting platform for DeFi projects. Developers can now create decentralised apps (dApps) that power DeFi platforms.

In addition, Fantom is an ideal platform for NFT marketplaces and ecosystems because Fantom has very fast transaction speeds (10,000 per second) and incredibly low transaction costs (less than €0.01). This allows collectors and traders to buy, sell or trade digital collectibles with ease.

Enjin is a company that provides an ecosystem for blockchain-based gaming products to be interconnected. The main thing Enjin offers is the Enjin Network, a social gaming platform on which users can create websites and clans, chat and host virtual shops.

Management of virtual goods for games

On the Enjin platform, gamers can create, manage and trade their virtual assets. Developers on the other hand can issue customized tokens, unique items or privilege tokens. The virtual assets, or NFTs, can represent anything from accessories for game characters to trophies or swords and shields.

Enjin offers an NFT marketplace within a game environment. Players of the game buy in-game items created by developers and can trade them for other items. In addition to trading items, players can use the in-game currencies to perform various activities in the game. The special thing about in-game items on the Enjin platform is that they have real value. The items are bought, sold or traded against ENJ, Enjin's native token, which can be purchased with euros or dollars.

Want to know more about our cryptocurrencies?

Check out our entire cryptocurrency selection.