The turbulent cryptocurrency market has attracted many new users in the past few years. Since blockchain technology could eliminate the banking system, banks around the world are now looking into creating their own digital tokens. Those tokens will be called ‘Central bank digital currencies’ (CBDC). In the article below we will explain what exactly a CBDC is, and why it will matter in the near future. 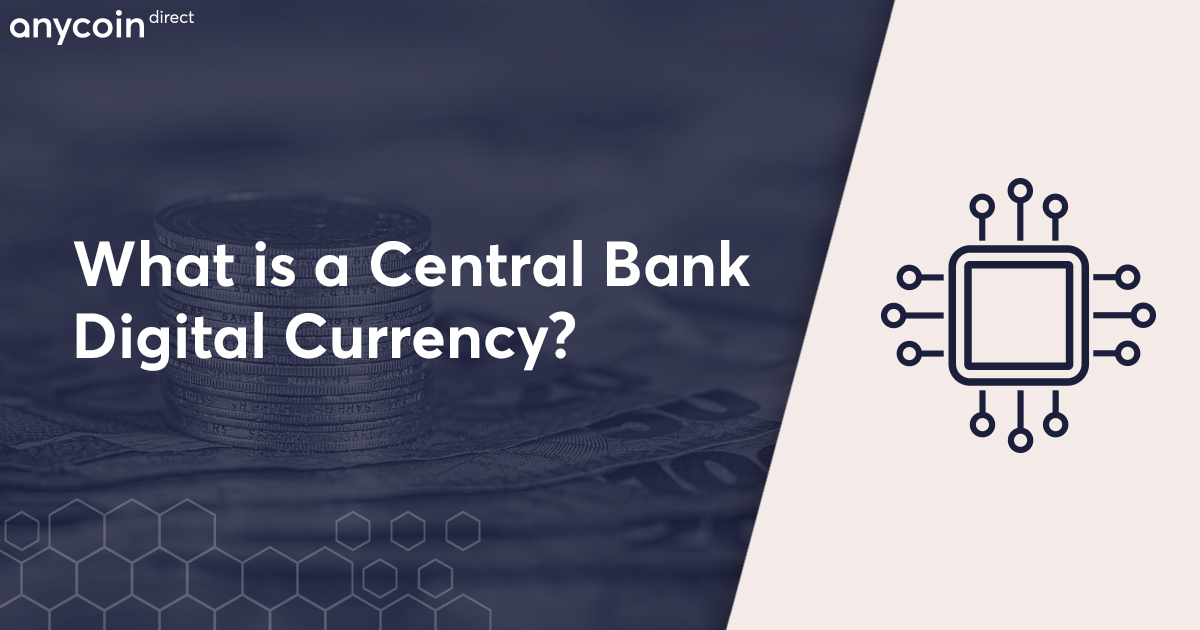 What is a CBDC?

A Central Bank Digital Currency (CBDC) is a digital token that is used to represent the virtual form of an existing fiat currency. A payment token like this is fully backed by a central bank, and will be seen as legal tender. All transactions on this network will be executed on a government controlled blockchain. Unlike cryptocurrency projects such as Bitcoin, a CBDC is centralized in nature. The digital currency will be regulated by a governing entity (like banks or governments) on a so called permissioned or altered blockchain network. Until date, no country has officially finished or launched a CBDC. However, they are being developed as we speak, and will start to appear in the coming years.

How does it work?

A CBDC is based on Bitcoin's underlying technology called: ‘Distributed Ledger Technology’. Instead of one central entity regulating all the transactions, the data will be stored and validated by many financial entities. These financial entities will be selected by regulated banks or governments. This aspect is in direct contrast to how Bitcoin works, however, the underlying technology is the same. Both systems make use of a blockchain (a database in which information is permanently stored).

Pros of a CBDC

Since cryptocurrency is currently absorbing billions of dollars into the system, banks are losing money and control over the assets. However, around 1.7 billion people on earth are currently ‘bank less’ (meaning they aren’t registered at a bank and are not able to participate in the financial system). Adding a supplementary way for people to participate through CBDC’s can be a great way for banks and users alike, giving people around the world access to safe and regulated digital currencies.
Another nice-to-have is that large scale transactions can be made with ease on a blockchain, while it asks for big logistic actions using the traditional system. For example, the worldwide COVID-19 stimulus checks that have been provided by governments, would have made it easier for banks to deploy the money helicopter.
Banks also want financial inclusion. Missing out on a new way to let people around the world use your CBDC is something banks don’t like to do. That is why about 70% of the world’s central banks are currently investigating and testing out the possibilities with CBDC’s.


Issuing a well-designed digital euro could not only preserve the role of the euro in domestic payments, but also enhance its global role, says Executive Board member Fabio Panetta on the international role of the euro. Read the report here https://t.co/x41wUH458i pic.twitter.com/7nus8cHpuH

For many banks, stable coins like Tether and Binance USD are a threat. In theory, banks aren’t needed anymore in a perfect decentralized system. In a way, banks are also trying to protect their monetary sovereignty with the creation of a CBDC. Since no single entity can control a blockchain, this technology can be seen as a dangerous enemy by many banks around the world. This could also be one of the reasons why banks are heavily invested in the creation their of digital currency.

Banks have been our safeguard for holding money for many years now, since many people have big trust in banks, they need to innovate as well. The technology behind a CBDC provides an excellent balance between user privacy and security. Since the demand for this technology is very big, and most people have not entered the cryptocurrency world yet, banks can expect a great adoption rate after launch. It will also generate an extra source of income for banks.

The future of finance

Will new technologies like this become the future of finance? Nobody knows that yet. We have to wait and see what the different central digital currencies will be able to provide, and how the adoption will go.