We are halfway through 2021. To say that it was an eventful six months is an understatement. Nevertheless, the short-term future looks bright. Summer has officially begun and the corona measures are being phased out in many countries. However, what about our beloved cryptocurrencies? In this blog, we will take a mid-term review over these past six months in the crypto world. 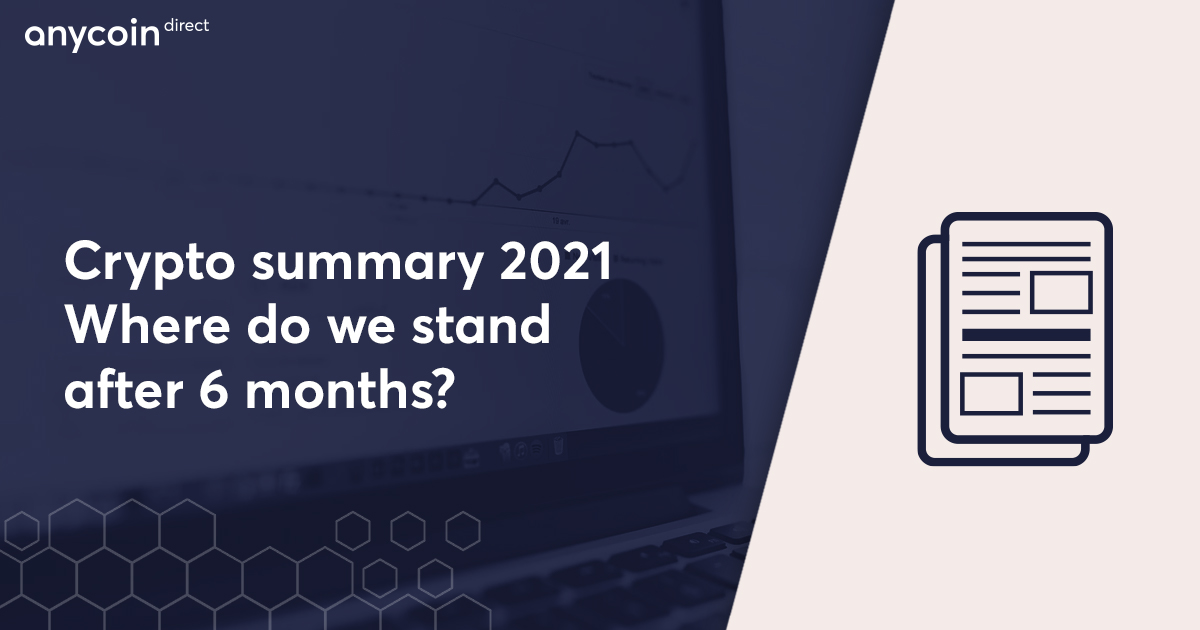 So far, it has been quite an eventful year. For many of you, crypto may have been a contributing factor. From the beginning of the year, many cryptocurrencies rose parabolically. Meanwhile, this growth has been halted, in the form of a total market correction. So how did this situation occur?

Let us go back in time. It is New Year's Eve. Bitcoin is mentioned frequently during the festivities. The coin after all, broke through its all-time high of 2017 in December and has been bullish in terms of market value for months. Many are wondering aloud whether it is another bubble, or whether the coin will continue to rise indefinitely.

The reality of the first half of 2021 was the fact that Bitcoin reached an all-time high of $65,000, increasing it's value by 125% from the price on January 1, 2021. OMeanwhile, Ethereum - the second largest crypto currency by market value - is growing steadily in the shadow of Bitcoin. But Ethereum's growth does not really begin until the start of 2021. Ethereum had a value of $722 per coin on 1 January 2021. In the 130 days that followed, ETH reached an all-time high of $4370 per coin. A percentage gain of around 500%.

Following in the footsteps of the major crypto currencies, a true rally of altcoins began. Altcoins is a collective term for all alternative crypto-currencies except Bitcoin. The value of most altcoins had not risen dramatically before 2021. This changed after Bitcoin and Ethereum skyrocketed. Most altcoins in the top 200 multiplied up to dozens of times within a few months. There were even standouts that went over a hundred times.

One of the causes of this rally is the Bitcoin mania at the start of the year, which spread to altcoin mania. While altcoins were still relatively on the sidelines in 2020, they generated plenty of media attention in 2021. The best-known example of this is the coin Dogecoin. This coin was invented as a joke in 2013, but has reached unprecedented heights thanks to Elon Musk and Co.

The decay since May

Cryptocurrencies saw a dramatic rise in value at the beginning of 2021. There were various opinions and forecasts of where the market might go. However, few expected a correction like the one in May. Bitcoin dropped 50% in value between 9 and 19 May. In most cases, the price of Bitcoin determines the price of the altcoins, and this situation was no different. Just about all cryptocurrencies dropped in value at astonishing rates. Many altcoins saw their value decrease by 80% in a matter of days. An unprecedented correction in the early history of crypto.

How the coins compare with the beginning of the year

Most crypto currencies have been recovering from the correction they suffered in May. But is everything doom and gloom for crypto currencies? If you look at where cryptocurrencies stood on January 1st, compared to today, you can only agree that 2021 has been a great success so far. In the top 200 coins in terms of market value ,according to Coinmarketcap, most coins still experienced positive growth in 2021. So how badly do we really stand?