With Ethereum 2.0 just around the corner, exciting times are ahead for the second largest crypto. In the crypto world, upgrades like these will have a huge impact on the technology and the value of the currency. In this blog, we discuss the possible effects on the price of Ethereum that the upgrades may trigger. 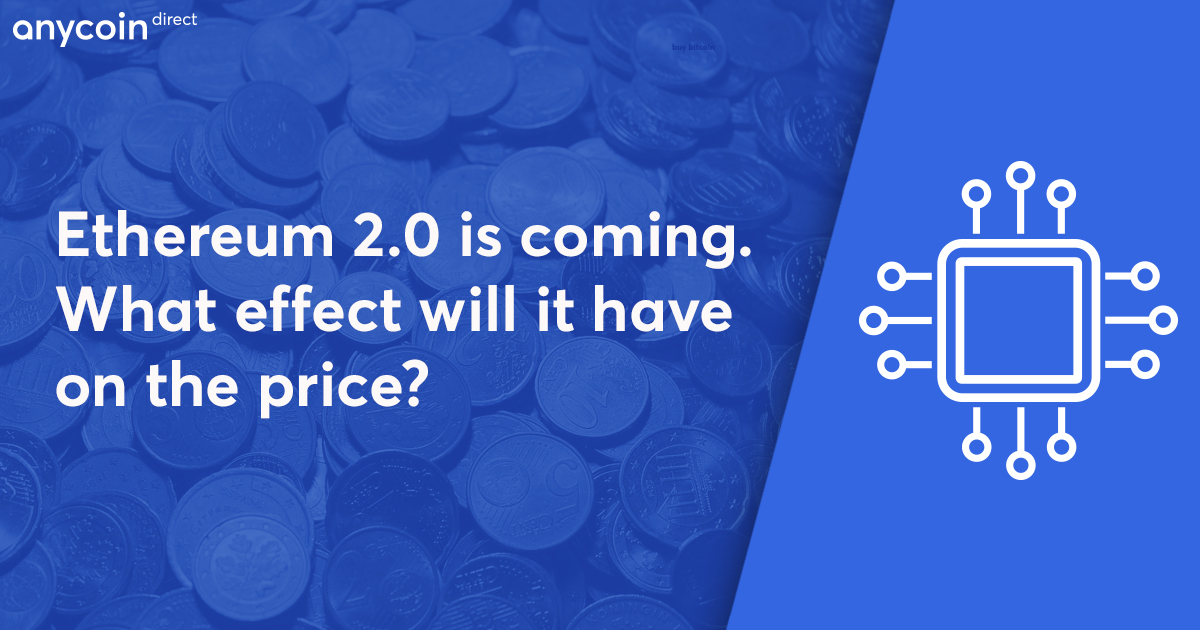 Ethereum 2.0 (ETH2.0) is an upgrade to the present Ethereum. These upgrade consist of several ''smaller’’ updates that will be published during the course of 2020 to 2022 (some already have been implemented). ETH2.0 will improve the scalability, security and sustainability of Ethereum. A detailed explanation of everything about Ethereum 2.0 can be found here.

Upgrades affect the value of Ethereum

The price of Ethereum is determined by several factors. For example, Ethereum's price tends to rise and fall at the same time or just after Bitcoin has done so. But Ethereum is far from completely dependent on Bitcoin. Upcoming upgrades tend to have a positive effect on the price of ETH. Again, with the upcoming ETH2.0 (and EIP-1559 upgrade), Ethereum has been hitting a new all-time-high ($3,483). Ethereum has risen from $1950 since 17 April '21 to above three thousand dollars on 3 May '21. That is a rise of more than 60% in percent in just three weeks. There are two possible reasons for this tremendous price increase. The first reason is that Ethereum's founder Vitalik Buterin gave a presentation on Ethereum's development roadmap. This mentioned several new updates that should be published in the coming years.

Proof of Stake VS. Proof of Work

For Ethereum, it is important to validate transactions on its blockchain in a decentralized way. Validation is supported by a consensus mechanism, which in the case of Ethereum is currently the Proof of Work consensus.

In this system, miners use the computing power of super computers to solve complex mathematical puzzles and verify new transactions. The first miner to solve the puzzle adds a new transaction to the register of transactions that make up the blockchain. The miner then receives a reward in the form of, for example, ETH (Ethereum's currency). A major disadvantage of the Proof of Work process is that it can be hugely energy-consuming, which is harmful to the environment.

Another example from the recent past showing that upgrades have a positive effect on the price of Ethereum is the launch of the Ethereum 2.0 Beacon Chain. According to the ETH2.0 roadmap, three major updates are planned, called "the Beacon Chain", "Shard chain" and "The docking". Of these, The Beacon Chain was released in early December 2020. As can be seen on the graph, the price skyrocketed after the launch of the upgrade. From December 1 to January 10, the price had increased by 125%. If you extend it to the next peak on 20 February, you are talking about an increase of more than 230% in just under three months.

Scalability and security get huge upgrade

The upgrades of Ethereum 2.0 should ensure that Ethereum will be able to catch up with competitors who are already much more advanced in terms of scalability and security.

Currently, Ethereum's network can only support about 15 transactions per second. An additional disadvantage is that due to the slow transaction speeds, the network "overheats" and consequently people have to pay huge gas fees (transaction costs). Ethereum 2.0 promises to reach speeds of 100,000 transactions per second in the future. This increase will be achieved through the implementation of shard chains.

Security is an important feature of Ethereum 2.0. Most PoS networks have a small set of validators, which makes for a more centralized system and reduced network security. Ethereum 2.0 requires a minimum of 16,384 validators, making it much more decentralized - and therefore more secure.

Security checks of Ethereum 2.0 code are performed by organizations including blockchain security firm Least Authority and Quantstamp. The Ethereum Foundation is also setting up a dedicated security team for Ethereum 2.0 to investigate potential cyber security issues in the cryptocurrency.

Before ETH2.0 is launched, it is possible for Ethereum holders to stake ETH on the test network. Staking means that you, as an investor, purchase crypto coins and hold them in a wallet for a certain period of time. Over this amount, you will receive a fixed interest, in that respect it works almost the same as having money in a bank.

To be allowed to stake on the test network, you need to invest a minimum of 32 ETH. These investments are fixed until Ethereum 2.0 is officially released. Staking in ETH 2.0 involves some risk as it is not clear when Ethereum 2.0 will be fully released. It is expected that "the Merge" will start around 15 September 2022. From then on, the network will operate fully with the PoS algorithm, and the test network will merge with the main network.

ETH 2.0 can create a shock effect

Ethereum's flagship is its decentralized financial ecosystem, also known as DeFi. Unfortunately, at the moment a majority of DeFi is almost inoperable due to Ethereum's network being too slow and overloaded.

This overloading means that transactions on the network may take a long time or fail to take place. It also results in expensive transaction fees. For example, on Uniswap, a decentralized exchange and liquidity provider on Ethereum's network, you have to pay around $84 to complete a single transaction, regardless of size.

The proof-of-work chain Sepolia merged with its proof-of-stake chain on Wednesday 6 July, bringing Ethereum one step closer to implementing the Merge to the mainnet. With this, Sepolia succeeds Ropsten, which carried out a successful merger on 8 June.

The merger of the penultimate test environment network (testnet) before the Ethereum blockchain makes its long-awaited transition to proof-of-stake from proof-of-work has been successfully completed. Sepolia was the second of three public testnets to undergo the Merge. Only Goerli still needs to perform the Merge before the entire network can move to a proof-of-stake environment.

Since the merge there have been no reports of disruptions and it can be said that the merge was successful without any after-effects.

The Sepolia merge consisted of two steps. The first step was to update their consensus layer and execution layer clients. This then triggered two phases: the first at epoch level on the Beacon Chain and the second when hitting the total difficulty value on the execution layer.

After Sepolia, test network Görli also carried out the merge successfully. The Görli merge was the last test run before the mainnet can make the switch from PoW to PoS. The transition of the test network took place on the 11th of August around 01:45 UTC. The merge was a merge with the Prater testnet. The Prater testnet is a Proof-of-Stake Beacon chain and was developed to test node-validators actions. Actions that simulate staking is what Prater testnet specialises in.

Launch of The Merge

After being postponed several times, a launch date has finally been set. Following the Merge's of the Ropston, Sepolia and Görli testnets, Ethereum's mainnet will move from Proof-of-Work to Proof-of-Stake on the 15th of September. 'The Merge' is a merger of the Ethereum Virtual Machine (now PoW) and the Beacon Chain (PoS testnet). The Merge ensures that Ethereum's virtual machine can continue with the PoS algorithm. PoS makes the Ethereum network more sustainable by saving energy compared to the PoW algorithm. Based on a long-term forecast, the network will save 99.9% on energy consumption. It also opens the way for implementing scalability solutions, making the network faster.

‘The Verge' is the third major update that should make Ethereum's network more user-friendly. The Verge should make it easier for users of the network to operate as a node by reducing the need of a heavy computer to work as a validator.

The efficiency of the network will also be improved in the future thanks to the update 'The Purge'. The update will remove customer data that is more than one year old, so that nodes no longer need to store old customer data. Data from smart contracts, protocols and wallet addresses with little interaction will be moved to another repository.

The Ethereum Virtual Machine (EVM) is also being improved with the update called 'The Splurge'. On the EVM, all Ethereum accounts can be found, DApps are launched and smart contracts are executed.

#Ether’s 1,500% jump is just the start for the Crypto faithful. Second-largest token has scaled a series of peaks this week. Optimism is overshadowing signs the rally may be overextended. https://t.co/zdvT7rW3N0 pic.twitter.com/EddLGa6yCm

In the graph shown below, several price predictions have been made, including the year the prediction takes place. As you can see, some of the predictions are already outdated. Such as Crispus Nyaga's ($2500) and Simon Dedich's ($3000), less than a year after making the prediction. PrevisioniBitcoin has its forecast somewhere in the middle at a price of $4740 in 2022. From this point, the price predictions are a lot higher, with Coinpedia ,Coinpriceforecast and Longforecast predicting an price over $8000 as of 2022. From this perspective, DigitalCoinPrice is still conservative with a price forecast of $9400 in the year 2028.