After losing the 1:1 peg to the dollar, both Terra LUNA and TerraUSD (UST) experienced a massive crash. This crash caused dark clouds to gather around the crypto industry. The entire market capitalisation has shrunk by billions, from $1.8 trillion at the beginning of May to $1.2 trillion now (mid-May). A drop of approximately 40% in just a few days.

LUNA and UST, which are largely to blame for this debacle, are currently worth only a fraction compared to the first week of May, with LUNA at $0.0002 (previously $85) and UST at $0.10 (previously $1). In this article, we will tell you all about the ecosystem crash, update you on the recent price developments of LUNA and UST, and discuss what the consequences of the crash will be for Terra (and the rest of the crypto industry). 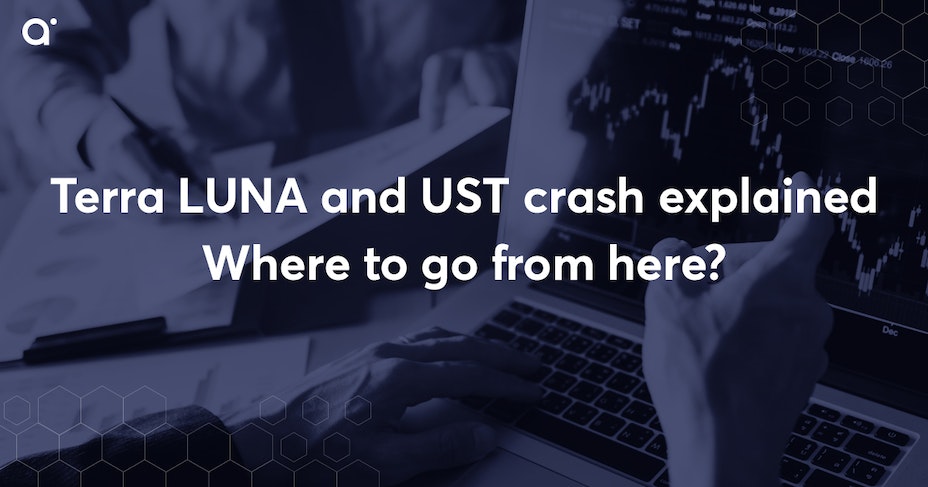 To get a better idea of how LUNA and UST were able to crash, we will first explain what Terra's ecosystem looks and works like. Terra is a blockchain protocol that uses stablecoins that are linked 1:1 with fiat currency. Fiat currencies are currencies like the dollar or the euro. Terra has several stablecoins such as TerraKRW and TerraIDT, but by far their most valuable stablecoin is TerraUSD (UST), which is pegged 1:1 to the US dollar.

Let's take a practical example to better illustrate the protocol. Suppose you own UST and 1 UST is worth $1.01, then as a user you are encouraged to use Terra's swap module to exchange $1.00 worth of LUNA for 1 UST. In this case you make $0.01 profit per UST that you exchange for LUNA.

How did the crash of Terra's LUNA and UST happen?

The crash at UST and LUNA occurred because the balance was broken. This happened as follows: Many people who owned UST had stored it on Terra's Anchor Protocol. Holders of UST on the Anchor Protocol were guaranteed 20% interest per year. All you had to do was lock up your UST for a certain period of time, like a savings account. At one point, 75% of all UST was deposited on the Anchor Protocol.

What happened last week was that big UST whales (people with a multi-million position in UST) pulled a huge amount of UST out of the Anchor Protocol. This briefly caused UST to lose its 1:1 peg with the dollar and be worth $0.98 for a few hours. After this unpegging, people started to fear for their UST assets and more and more people tried to dump their UST. As people started to burn their UST in exchange for LUNA, the supply of LUNA increased explosively. This in turn caused the price of LUNA to drop significantly. The inevitable happened, namely that the balancing mechanism stopped working. This created a so-called 'death-spiral'.

What happened in the days after the 1:1 depegging was beyond the imagination of many. In just a couple of days, the prices of both UST and Luna crashed to extraordinary levels, even by crypto standards. The stablecoin, which under normal circumstances should always be $1, is only worth a tenth of that. The value of LUNA has fallen much, much further and, according to Coingecko, has dropped 99.999% in the past week, from $85 to an unimaginable $0.0002.

What makes the situation more distressing is that many UST and LUNA holders have their assets locked up on the Anchor Protocol for a period of time. As a result, they were unable to withdraw their funds from the Anchor protocol and saw their UST or LUNA shrink to virtually $0 in a matter of days. An example of how destructive the UST and LUNA crash is can be seen in the tweet from KSICRYPTO, a well-known YouTuber who also often speaks out about crypto on his Twitter. He bought $3 million worth of LUNA when the price was already around $30 per LUNA, a few days later this was only worth $1000.

Do Kwon's recovery plan for LUNA and UST

As the debacle of LUNA and UST unfolded, Terra co-founder and CEO Do Kwon issued several tweets outlining measures to prevent further disaster. The first measure was to speed up UST's burning process so that the 1:1 peg would be restored more quickly. In retrospect, we know now that it clearly did not work.

Meanwhile, UST and LUNA seem dead and buried. The hyperinflation of LUNA does not seem to be able to recover. Before the crash, there were 725 million LUNA tokens in circulation compared to about 7 trillion LUNA tokens now, and this number continues to rise.

Do Kwon announced that he will do everything in his power to restore UST's and LUNA's prices. If that fails, a hardfork of LUNA is also an option “I understand the last 72 hours have been extremely tough on all of you - know that I am resolved to work with every one of you to weather this crisis, and we will build our way out of this,” Do Kwon said hopefully.

The question is to what extent people are still willing to invest in UST, LUNA or any future crypto that Do Kwon is associated with. Terra is known for its large fanatical following. There is a reason why both LUNA and UST were in the top 10 of cryptocurrencies showing the highest market capitalisation. Still, a part of the fanatic community will think twice before investing, since they too have seen their assets shrink.

The enormous volatility (price fluctuations) caused by the UST and LUNA crashes caused some exchanges to temporarily make LUNA unavailable for buying and selling.

We at Anycoin Direct also chose to make LUNA unavailable for a short period of time. Currently it has been reinstated but we are monitoring the situation closely. In addition, we strongly advise you to do your own research before you start investing in cryptocurrencies.

So how does it look for the rest of the crypto market?

When two cryptocurrencies with a huge market capitalisation crash, this has consequences for the entire crypto market. Across the board, cryptocurrencies lost millions to billions in dollars. In addition to UST and LUNA, several other altcoins also fell in value by tens of percent. The total value in the crypto market has shrunk by approximately $600 billion. This makes it the absolute biggest crypto crash to date. It is certain that some cryptocurrencies will not survive this crash. Especially other algorithmic stablecoins are having a hard time. One by one, they are losing the 1:1 link with the dollar. We will name some remarkable ones.

The algorithmic stablecoin on the Waves blockchain ecosystem, Neutrino USD (USDN), is not escaping the negative sentiment surrounding algorithmic stablecoins. Neutrino USD and Waves have great similarities to UST and Terra. As you can see from the chart below, Neutrino USD lost a large portion of its value on May 11, simultaneously with the crash of UST. Neutrino USD, unlike UST, seems to be recovering from this crash. Nonetheless, USDN remains on guard as it also struggled to maintain its 1:1 peg against the dollar in April. USDN also never recovered beyond $0.98 after the April crash.

Unfortunately for people who have invested their money in DEI, it has also been crashing since 16 May. The algorithmic stablecoin running on Fantom's network started to show the first cracks at the end of April. The stablecoin, which like UST is pegged 1:1 to the dollar, dropped to $0.97. It soon became clear that it would not stop there. During the night of 15 to 16 May, DEI completely crashed and reached a low of just above $0.50. DEI represents a much lower market capitalisation than UST, namely $62 million. Nevertheless, holders of DEI should fear for their assets, as algorithmic stablecoins have lost a lot of confidence in the market.

Is there any hope for crypto?

Trust in (algorithmic) stablecoins is plummeting and the crypto market seems to have been in a downward spiral for a longer period of time. To what extent is there still hope for the crypto market? Well, there is still a lot. Crypto markets always move in cycles and at the moment we are in a cycle where the bull market turns into a bear market. Looking at the past, you could say that during this transition, these kinds of severe market corrections happen more often. Sooner or later the market will recover from this and the cryptocurrencies which are fundamentally worthwhile will recover from these low prices.

Furthermore, it is a good sign that Bitcoin did not completely crash while some altcoins saw their value halve in a short time. This shows that Bitcoin, and to some extent Ethereum, have matured and are the most stable despite the severe corrections. Don't forget that Bitcoin, the very first cryptocurrency, was only conceived 13 years ago by a person no one really knows who it is. We are looking at you, Satoshi Nakamoto. In these 13 years, Bitcoin and the cryptocurrency market itself have gone through many ups and downs. This volatility and capriciousness of the market will undoubtedly continue in the years to come, but we sense to some extent the market is maturing as crashes like this do not hit the largest cryptocurrencies as hard as they have in the past.