When you read about cryptocurrencies, you often hear about how the network is distinguished by speed. How do these speeds come about and what are the fastest blockchains at the moment? 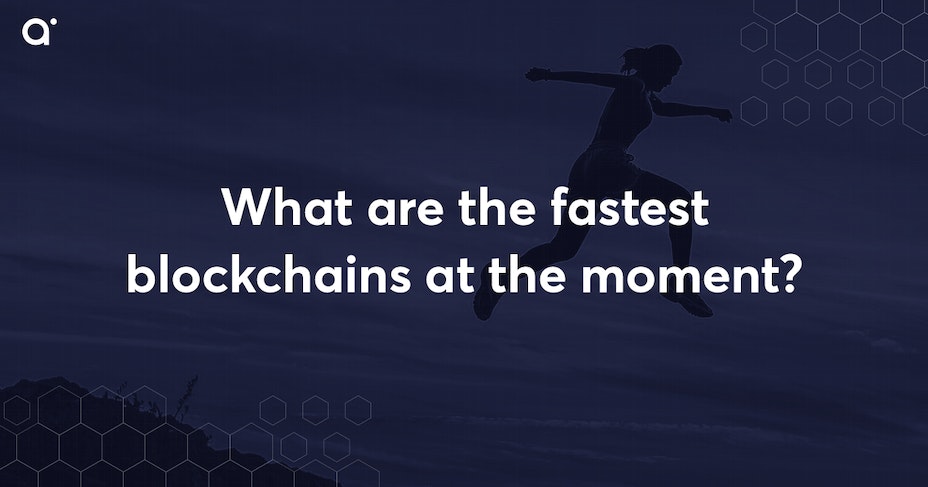 Each blockchain works with its own consensus algorithm. In particular, Proof-of-Work, Proof-of-Stake and Proof-of-History are well-known and widely used algorithms that all ensure the security and speed of the blockchains in their own way.

Bitcoin (BTC) is the first crypto using blockchain technology and is therefore also called the ancestor of the crypto world. Satoshi Nakamoto describes in his published white paper how Bitcoin can perform transactions in a decentralized and secure manner using the Proof-of-Work (PoW) algorithm. Thinking that a third party was no longer necessary, Satoshi Nakamoto created the first cryptocurrency in 2009. The PoW algorithm is a system where the so-called miners provide their computers to solve difficult mathematical formulas needed to mine a new block. By mining a new block you help the network to verify transactions. You are paid BTC as a reward for mining a block.

The Bitcoin mainnet is not very well built in terms of scalability and this is reflected in the transaction speed. Bitcoin can only perform 7 transactions per second on average and this is mainly because it takes between 10 and 20 minutes to add a new block to the network. The Bitcoin community came up with a solution and that is the Lightning Network (LN). The Lightning Network is a second layer solution built on top of the Bitcoin blockchain.  Everything that happens on the first layer (Bitcoin blockchain) we call on-chain and everything that happens on the second layer (LN) we call off-chain.

Lightning Network solves the slow transaction speed and high cost of a transaction. It does this by performing transactions off-chain, which means that it does not need to use Bitcoin's network. So transactions do not need to be validated by the network. This is done by using a Payment Channel.

Only opening or closing a Payment Channel requires the Bitcoin network. When you open a Payment Channel you decide how many Sats (0.00000001 BTC) you want to provide and register yourself as a node that needs to be validated on the Bitcoin Network. Then you can send and receive BTC from anyone registered as a node in the Payment Channel. The Lightning Network can handle thousands of transactions per second.

After Bitcoin's launch in 2009, Vitalik Buterin wanted to build a better version of Bitcoin that could do more than just perform transactions. In 2013, Vitalik Buterin published his white paper on creating an open source that allows for the execution of Smart Contracts. Like Bitcoin, Ethereum uses the Proof-of-Work algorithm.

Ethereum is currently the second largest cryptocurrency after Bitcoin. It is a great success, but the network is experiencing many problems. For example, in recent years it has become apparent that the network cannot cope with the large amount of traffic it receives. The Ethereum network is twice as fast as Bitcoin at 15 transactions per second, but is slow compared to its competing blockchains. Like Bitcoin, it suffers from scalability issues, and the cost of executing transactions can quickly exceed $100 per transaction during busy periods. Change was needed, and Ethereum has been working on it for the past few years.

Ethereum 2.0 is the solution that should make the network faster, safer, more user-friendly and more sustainable than the current system. Ethereum 2.0 consists of several small updates that should ensure that Ethereum completely switches from a Proof-of-Work (PoW) algorithm to a Proof-of-Stake (PoS) algorithm. The PoW algorithm is energy-consuming, because computers have to work hard to solve the complicated calculation formulas. As a result, miners face high energy bills and the network is not exactly sustainable either. The PoS algorithm is more energy efficient because no computers are needed to keep the network running. Initially, a test network called 'The Beacon Chain' has been used to test the PoS algorithm.

Zilliqa was founded in 2017 by academics, entrepreneurs and engineers from the National University of Singapore. The network was launched as an Initial Coin Offering (ICO). This means that others were able to invest in Zilliqa before the coin was launched, giving the developers the financial space to execute their plans. In exchange for the investment, the investors get paid ZIL-coins. Zilliqa uses the Proof-of-Stake algorithm, which allows Zilliqa holders to make their ZIL-coins available as a node to help the network add new blocks.

The network creates speed and scalability through sharding. With sharding, transactions can be performed in parallel by nodes. A minimum of 600 nodes is required to run a shard safely. Currently there are six active shards, allowing the network to process 2500 transactions per second.

In 2020, the company Avalabs has developed a crypto that uses a unique Proof-of-Stake (PoS) algorithm. Avalanche uses the Avalanche Consensus Algorithm (ACM). The difference with the traditional PoS algorithm is subsampled voting. Subsampled voting is a way of validating, where it does not matter how many validators are active. The transaction is always performed within a certain time frame. The checking of the blocks is done randomly, so that information is constantly being sent back and forth. Avalanche can process 4500 transactions per second per subnet. Each subnet is its own network added to the Avalanche blockchain. Currently, two subnets are live and there are four test subnets.

The blockchain of Cosmos

Solana is a network known for its speed. A new block is mined every 400 milliseconds. Compared to Ethereum (every 10 seconds) and Bitcoin (every 10 minutes), this is incredibly fast. In 2020, Anatoly Yakovenko developed Solana together with a foundation from Switzerland. Solana has launched a new and unique consensus algorithm called Proof-of-History (PoH). The PoH works in conjunction with Proof-of-Stake and is very similar to the traditional Proof-of-Stake. It allows users to use their SOL coins to stake, thus acting as a validator.

PoH differs in the way it is validated. The mechanism captures past transactions using the SHA256 hash function. The input of an old transaction is used as output for a subsequent transaction. This creates an unbroken chain of hashed transactions. This is done in such an effective way that the correct sequence is determined and validators do not have to wait for other validators, making the system extremely fast. The network can potentially process ± 700,000 transactions per second.

Polkadot (DOT) was developed in 2016 by Gavin Wood, a co-founder of Ethereum. He made an attempt to build a better version of Ethereum. The main purpose of Polkadot is to be able to communicate with other blockchains such as Bitcoin and Ethereum. Polkadot is a network protocol that allows blockchains to communicate with each other via parachains. These are parallel chains that keep the pressure off the Polkadot mainnet. The main network is called the Relay Chain. On the Relay Chain, transactions are carried out permanently and it is possible to stake DOT to secure the network, while the parachains are networks like smart contracts created by users.

The network is secured by the Nominated Proof-of-Stake (NPoS) algorithm. This is a variant of the traditional Proof-of-Stake algorithm. NPoS is a system where the nominators support the validators by giving them their trust by nominating DOT to the validator. The nominators have to choose carefully to whom they give their trust, because they can lose all their DOT coins if they nominate an untrustworthy validator. In this way, malicious persons can be excluded from the validation process and the distribution of power can be protected. When adding a new block, the validator is rewarded in DOT coins and part of that goes to the nominators.

Thanks to the parachains that take some of the pressure off the mainnet, the network can process >1000 transactions per second.

Dogecoin (DOGE) was founded in 2013 as a joke by Jackson Palmer and Billy Markus. The coin is the first Memecoin and is almost an exact copy of Bitcoin and its main purpose is to carry out transactions in a decentralised manner. The main difference with Bitcoin is that there are many more Dogecoins are available. For example, a maximum of 21 million Bitcoins are marketed, while there are currently over 132 billion Dogecoins traded and the number of Dogecoins continues to rise. Dogecoin uses the Proof-of-Work algorithm, which means miners get paid DOGE when they add a block to the network. The network can process 30 transactions per second.

Litecoin (LTC) was developed in 2011 by Charlie Lee who wanted to build an improved version of Bitcoin. He believed that the high transaction costs and the slowness of the network needed to be solved to keep the crypto world workable in the future. The network is secured by the Proof-of-Work algorithm. Miners are used to add new blocks to the network. They are paid LTC coins as a reward for their hard work. With the expected update 'MimbleWimble', Litecoin is well on its way to becoming a privacy coin where anonymity is key. Litecoin's network is capable of 56 transactions per second, but like Bitcoin they have integrated the Lightning Network which allows thousands of transactions per second.

The blockchain of EOS

EOS is a blockchain that specialises in developing dApps in an efficient and effective manner. The network was founded in 2018 by Dan Larimer and Brendan Bloomer of Block.one. EOS uses the Delegated Proof-of-Stake (DPoS) algorithm. This is similar to the traditional Proof-of-Stake algorithm, but differs in the way it is validated. Every day, 21 validators are appointed by the network. Users of the network can delegate their EOS coins to validators, giving them a share of the reward. These users are called delegators. The network is highly scalable thanks to the DPoS consensus algorithm. Currently, the network can handle ± 4,000 transactions per second, but due to its scalability, this can potentially increase to more than 100,000 transactions per second.