Avalanche has been a well-known cryptocurrency within the crypto world since its launch in 2020. We have heard a lot about the network and according to some, Avalanche is a coin that can surpass Ethereum. Avalanche is a protocol that is uniquely built compared to Bitcoin and Ethereum. The blockchain technology of Avalanche was developed by Avalabs. In 2021, we saw AVAX rise from over $4 to a high of $134 per AVAX. This means the coin has had a successful year. 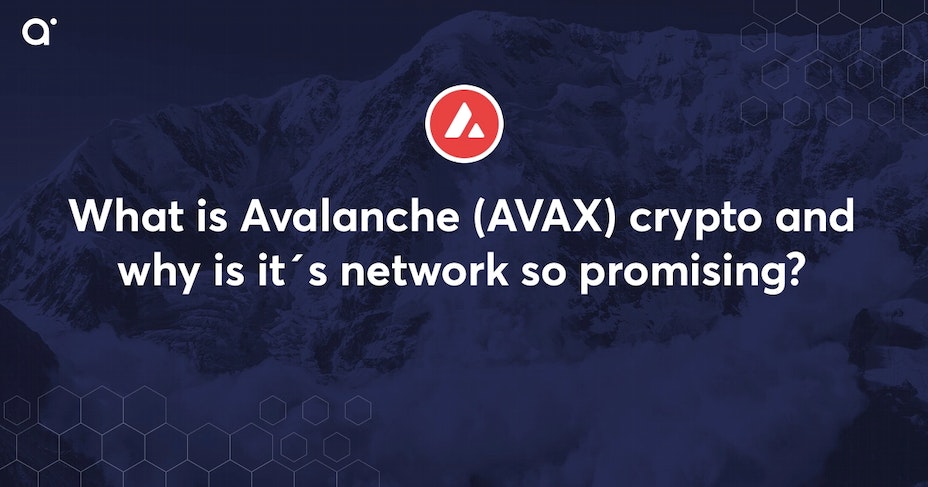 In 2020, Avalabs developed its own protocol called the Avalanche Consensus Model. A protocol is a document that describes how to perform an action, step by step. Consensus, on the other hand, is an agreement between all members, in this case the members (validators) of Avalanche. The consensus model has been used since 1980. The first variant was the Practical Byzantine Fault. This was a computer mathematical algorithm that helps to draw conclusions from data. After this model, Satoshi Nakamoto designed the Proof-of-Work model in 2009.

The Avalanche Consensus Model is most similar to the Proof-of-Stake algorithm but differs in a number of ways. For example, the model uses 'subsampled voting'. This means that a large group of volunteers have signed up as validators to randomly check blocks. They then have the choice to accept or reject a block. This happens continuously, so that information is sent back and forth between validators. This results in a system where it does not matter how many validators are active or how many nodes there are. The agreement will be reached within a certain time frame.

It is also more resistant to attacks than the networks on which  Ethereum and  Bitcoin run. For example, someone can take control of Bitcoin if they own 51% of all computers. With Ethereum, if 51% of the coins used for staling are owned by one person, then that person controls the network. With Avalanche, you need to own 80% of the network to take control of it.

The uniqueness of Avalanche is that the network consists of three blockchains:

The X-Chain is specifically for application creation, token transactions and management. This is made possible by a DAG (Directed Acylic Graph) and means that different data streams flow towards the same side using a data structure.

The C-Chain is specific to smart contracts and is an exact copy of the Ethereum Virtual Machine. A smart contract is a digital contract that completes an agreement between two parties, when agreed under certain circumstances. A smart contract does not require a third party and is therefore decentralised. The Ethereum Virtual Machine (EVM) is a virtual programme that is part of Geth. Geth is in turn an implementation of the Ethereum protocol. This allows you to copy Ethereum dapps from the Ethereum blockchain and integrate them on the Avalanche blockchain. This allows developers to introduce their project on the Avalanche blockchain without much work.

P-Chain is the abbreviation for Platform Chain and is specifically for managing the subnets, coordinating the validators and managing the staking process. Subnets are networks that are linked to the ecosystem of Avalanche crypto. The fact that subnets can be added makes the blockchain scalable. Each subnet can have its own blockchain. These blockchains can also choose their own consensus model, such as Proof-of-Work and Proof-of-Stake. Another option is that the subnets can be both private and public. Subnets therefore ensure that the network is scalable, but also versatile. The fact that subnets consist of different blockchains also means that each subnet can set its own rules.

AVAX is the crypto currency that is linked to Avalanche. This means that the Avalanche Consensus Model works on the basis of AVAX. The token, like Avalanche's blockchain, was developed by Ava Labs. The team consists of developers who have gained experience in the past at Google, Microsoft and NASA, among others.

At the time of writing there are 244,912,348 AVAX in circulation. The maximum number of AVAX tokens that will eventually be released is 720 million AVAX coins. This means that 34% of the total supply is currently in circulation. In the past, Avalanche has burned AVAX coins. Token burning reduces the number of coins in circulation. The burned coins are sent to a 'dead' wallet address and are therefore no longer tradable. A total of $64 million worth of AVAX was burned. The total value of AVAX at the time of writing is $16 billion.

AVAX can be used to trade with other cryptocurrencies. It is also possible to stake Avalanche. This is very important for the blockchain, because Avalanche's blockchain needs discontinuing coins to carry out transactions. A third option is to use Avalanche for dapps and other cryptocurrencies on the Avalanche blockchain. By adding liquidity to 'liquidity pools' you will get paid in the corresponding crypto currency as a reward. You will often be paid a higher percentage than in case of staking. However, the risk of loss is greater, because the coins for which you add liquidity are often less well-known coins and smaller coins. Important partners of Avalanche are Curve and Aave. Among other things, they offer liquidity pools on the Avalanche network.

It is possible to contribute to the Avalanche blockchain by staking AVAX. As a reward for staking Avalanche crypto, you will be paid in AVAX coins. The disadvantage of staking AVAX is that you need to own a minimum of 2000 AVAX coins to be able to stake. At the time of writing, this amounts to over $130,000 in AVAX coins.

NFTs on the Avalanche Network

Avalanche is a small player when it comes to NFTs. However, there are already a number of NFT marketplaces where you can trade Avalanche NFTs. An NFT is a digital artwork, video, music file, domain name or a piece of land in the  metaverse registered on the blockchain. The NFT marketplaces at the moment are:

TradingBeasts, based on their algorithm, expects a slightly higher price of $38.88. Finally, Gov Capital's AI expects Avalanche to rise to a price of $144.39 per AVAX coin in 2022.

Some companies and websites try to look far ahead and make predictions based on their own algorithms. The further you zoom out, the harder it becomes to make a realistic prediction. So take these predictions not too serious, because it is impossible to predict what AVAX will do in 2025.

TradingBeasts is more positive about the price development of the coin of Avalanche. According to their algorithm, the price for an AVAX coin will rise to $43.10 and TradingBeasts expects the price to continue rising in 2024. In 2024, Avalanche will be worth $64.05 per AVAX coin according to TradingBeasts. For 2025, they even expect a price of $77.30 per coin.

Avalanche crypto is unique in the crypto world because they have developed a new model, namely the Avalanche Consensus Model. The network of Avalanche consists of three blockchains, namely the X-Chain, P-Chain and C-Chain. Especially the P-Chain has an added value that is hard to beat. Subnets can be created on the P-Chain. These subnets can be different blockchains and even have a changing consensus model. This makes the network multifunctional and scalable. The fact that the network makes it possible to directly copy protocols from the Ethereum blockchain makes Avalanche interesting for dapps. These positive developments have also contributed to the fact that the coin AVAX, since its launch in 2020, has experienced a remarkable positive price development. In just over a year, the price has climbed from a generous $4 to $134 per AVAX. What the price will do in the future is hard to say. However, there are websites and companies that share price expectations. They expect a bright future for Avalanche.