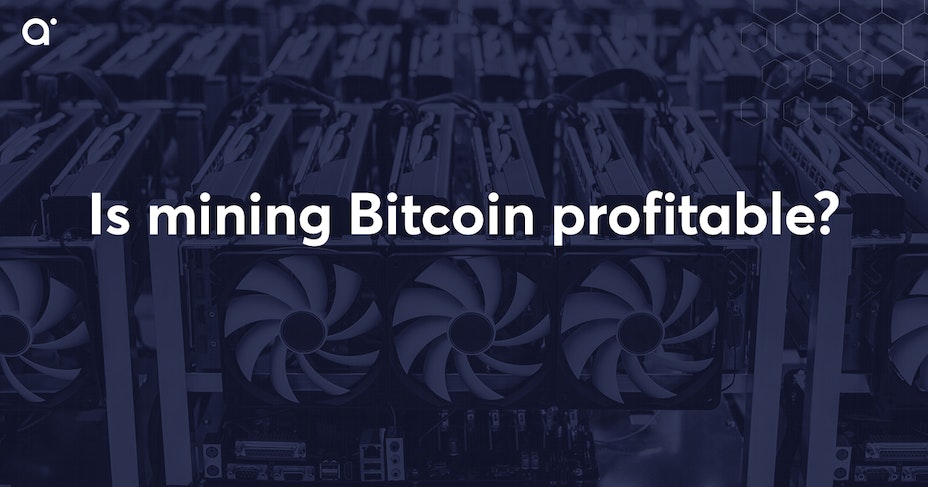 What is Bitcoin mining?

Bitcoin mining is done in a decentralised way. Decentralised means that the network is not run by companies, but by the miners who are spread all over the world. To mine Bitcoin, you need to use your computer to solve complex mathematical formulas. When your computer solves the formula, you are rewarded with Bitcoin, which is used to create new Bitcoins. Bitcoin mining is like a lottery. Multiple miners try to solve the same formula at the same time. Whoever is first (pulls the right number) can add the block to the network in exchange for bitcoins.

What does Bitcoin mining offer?

Solving a complex formula earns BTC as a reward. BTC is the abbreviation for Bitcoin and is the name of the coin. The Bitcoin network works with so-called halvings. This means that the reward for adding a new block to the blockchain is halved approximately every four years. The network has been around since 2009. That's when the first block called 'Genesis' was mined by founder and pseudonym Satoshi Nakamoto. The reward at that time was 50 BTC per mined block. In 2012, the first halving took place and from then on the reward was 25 BTC. In 2016 and 2020 another halving took place, resulting in a reward of 6.25 BTC at the time of writing. The next halving is expected to take place around 2024, which means that the reward for mining a block will be 3.125 BTC.

In order to mine, you need heavy computers. These computers are busy solving complex formulas all day long. This means that a lot of energy is needed to mine Bitcoin. In addition, computers that are suitable for mining are expensive to buy. You can start mining with a simple laptop, but the chances of solving a formula with a computer are very small. Therefore, to mine Bitcoin, you need an antminer. These hardware computers can easily cost thousands of dollars.

In addition, there is a lot of competition. We can see that China is the biggest Bitcoin mining country. They hold between 65 and 75% of the mining power. We also see that Scandinavian countries, Canada, and Russia are mining a lot of Bitcoin. In these countries, there are companies with mining farms with thousands of hardware computers working day and night. Why these countries? They have cold regions, which is perfect for Bitcoin mining because the computers get very warm. This means that less energy is consumed, making it more profitable.

When you take all the facts into account, mining Bitcoin on a small scale is hardly profitable.

What hardware can you use to mine Bitcoin?

In 2009, you could mine Bitcoin with a simple computer. Nowadays, with lots of competition, you need a powerful computer to mine Bitcoin. The more powerful the CPU (Central Processing Unit) and/or GPU (Graphene Processor), the better the chance of adding a block to the blockchain. Therefore, ASICs are chips that are often used in crypto mining. Companies like Bitmain sell Antminers that contain ASIC chips.

The most common way of mining Bitcoin for small miners is pool mining. Bitcoin mining pools were created to make it possible for smaller miners to mine Bitcoin. With mining pools, you pool your computer power with other computers. This means that you work with other computers to mine Bitcoin. Once your mining pool has added a block to the blockchain, the reward is distributed according to the share (the amount of computer power) that each participant has made available. This way, it is possible to mine Bitcoin with less powerful computers and it increases the chance of adding a block to the blockchain. Well-known BTC mining pools are F2Pool and AntPool.

If you want to know how much you will earn from a mining pool, you can use a Bitcoin mining calculator. Based on the hashrate your computer can handle, the power, the energy cost per KWh and the pool fee, it calculates what Bitcoin mining is expected to yield.

Is Bitcoin mining bad for the environment?

You often read that Bitcoin is harmful to the environment because it requires a lot of energy to run the network. As a result, there is a lively debate between Bitcoin critics and Bitcoin enthusiasts. Bitcoin critics in particular have been very critical of Bitcoin. On the other hand, Bitcoin enthusiasts ask for honest comparisons. For example, the Dutch news website RTLnieuws a study by De Nederlandsche Bank (DNB) shows that a bitcoin transaction is estimated to emit more Co2 than an average Dutch household does in a month. Even electric car manufacturer Tesla, which was initially positive towards Bitcoin and even accepted Bitcoin payments, stopped accepting Bitcoin payments after two months because Bitcoin was said to be environmentally harmful.

Bitcoin and crypto enthusiasts say that the wrong comparisons are being made. Bitcoin is a means of payment and should therefore be compared to today's financial banking system. Valuechain, a payment consultancy, conducted four years of research on Bitcoin's environmental impact and came to the conclusion Bitcoin enthusiasts were hoping for. With scientifically valid conclusions, the paper it says that Bitcoin uses up to 56 times less energy than the traditional banking system and even per transaction Bitcoin is 1 to 5 times more energy-efficient. This information can silence the critics. Furthermore, 60% of the energy used for mining currently comes from renewable energy sources.

Bitcoin is the best known cryptocurrency. However, there are many other cryptocurrencies that, like Bitcoin, use the Proof-of-Work (PoW) consensus algorithm. Here are some of the alternatives:

The largest cryptocurrency after Bitcoin is Ethereum (ETH). They too currently use PoW. This means that, like Bitcoin, the network functions through mining. Ethereum mining earns a miner two Ether per block. There are also mining pools for Ethereum, where you can mine Ethereum with others. However, Ethereum is going to switch from Proof-of-Work to Proof-of-Stake. This will happen around 15 September. Proof-of-Stake is a consensus algorithm where the network is run by validators who stake Ethereum. This provides 99.9% power savings and allows Ethereum to be earned without a computer consuming power all day.

Ethereum Classic was created from a hard fork with Ethereum. This blockchain, unlike Ethereum, continues to use PoW. The network is almost identical to Ethereum, but continues to believe in the decentralised Proof-of-Work algorithm. There are several mining pools available, where you can mine Ethereum Classic with other computers. The largest are Ethermine and 2Miners.

Dogecoin is a PoW blockchain that started as a joke. The founders never expected the first 'Memecoin' to be such a success. Currently, thanks to the interest of Elon Musk, Dogecoin is among the top 100 cryptocurrencies in CoinMarketCap. Dogecoin is almost an exact copy of Bitcoin, but has two advantages according to Doge's large community. The network can handle more transactions per second (30 TPS versus 7 TPS) and a lot more Dogecoin can be put into circulation, making it a better payment method according to many. The reward for adding a new block to Dogecoin's blockchain is 10,000 DOGE. Miners who started mining DOGE before 2021 have made a lot of money from mining Dogecoin. Since then, miners have been able to make profits of over 50,000% during Dogecoin's peak.

Litecoin, like Bitcoin, is a cryptocurrency that uses halving. Currently, you get 12.5 LTC for mining a block. In 2023 there will be a halving, so the reward from then on will be 6.25 LTC. The Litecoin community is determined and believes that Litecoin will play a bigger role in the crypto world. They believe Litecoin is a better version of Bitcoin and therefore could overtake Bitcoin in the future based on market cap. In particular, the speed and low transaction costs are reasons why the community believes Litecoin will eventually have a larger share than Bitcoin.

Staking a good alternative to mining

Crypto staking is according to many a good alternative to mining. Staking is done on blockchains that use the Proof-of-Stake (PoS) consensus algorithm and is currently the most widely used algorithm. What you do in PoS is act as a validator by using your crypto to help the network track and add new blocks to the blockchain. As a reward, you get paid a percentage of your deposited crypto. A heavy computer is therefore not required to be able to stake. There are a number of advantages that staking has over mining:

Bitcoin mining is necessary to make the Proof-of-Work consensus algorithm work. It has been done since 2009. Back then, the reward was 50 BTC, but since there is a halving every four years, the reward for adding a new block is currently 6.25 BTC. Currently, Bitcoin mining is hardly profitable, due to energy costs, high competition and high entry costs. Mining pools are a good alternative for small and beginning miners, because the chances of mining Bitcoin are higher and the entry costs are much lower. Besides Bitcoin, there are plenty of other altcoins that use the Proof-of-Work consensus algorithm. For example, ETC, DOGE and LTC are alternative coins for crypto mining. Especially for small miners, strike seems to be a better alternative. You don't need a heavy computer for staking and energy costs are hardly incurred, making staking a lot cheaper and easier. Besides, you generate passive income and you know what you are going to earn with staking.