In our previous DeFi article, we explained the concept of Decentralized Finance and whether it was just another buzzword or the future of finance. The conclusion? Experts stated that DeFi was being overvalued, but also mentioned that it wasn’t like the ICO bubble. They thought that the DeFi hype would decrease and that the market would fall in line with Bitcoin. Let’s see what September has brought the interesting world of DeFi, shall we? 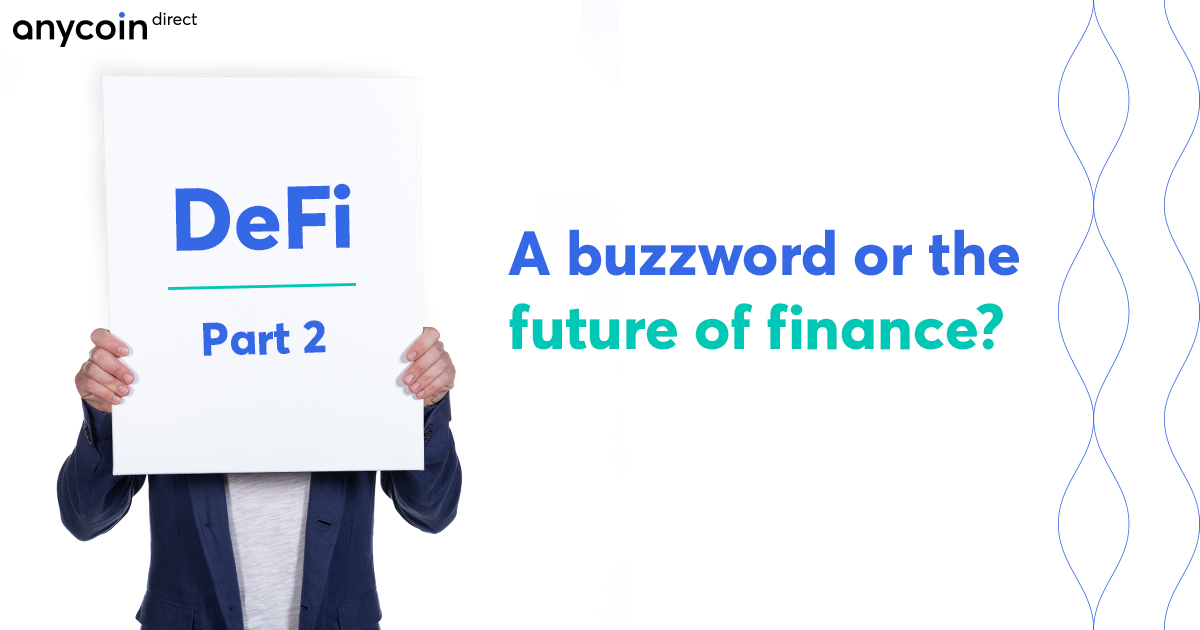 In our previous article, we mentioned the total value of the DeFi ecosystem. This is calculated via all smart contracts on the Ethereum network and all available Ethers and ERC-20 tokens on these contracts. On the first of September, the total value was calculated at a whopping 7,3 billion euro (which was a 100% increase compared to August). As of today, the 7th of October, the total market is valued at 8,6 billion euro. An increase of 17.81%. Not as extraordinary as the 100% increase of August, but still a steady climb.

Binance, the biggest crypto exchange in the world, wanted to invest in DeFi and launched a couple of projects in combination with a 100 million DeFi investment. Besides the investment, Binance also launched the DeFi Composite Index also known as DEFIUSDT. DEFIUSDT monitors the price of a DeFi ‘basket’, a combination of the best known DeFi assets including Band Protocol (BAND), Compound (COMP), Kava.io (KAVA), Kyber Network (KNC), Aave (LEND), Chainlink (LINK), Maker (MKR), Synthetic Network Token (SNX), Swipe (SXP), en 0x (ZRX). During its launch at the end of August, the basket of DeFi assets had a combined worth of €900 according to the DEFIUSDT. More than a month later, this basket is worth €433. A decrease of 52%, meaning that the value of all the coins in the DeFi basked was halved.

Long or short the #DeFi market with up to 50x leverage.

The DeFi rollercoaster also affected the entire Ethereum network. Since all DeFi projects run on Ethereum smart contracts, the number two on CoinMarketCap profited from the enormous interest. Unfortunately, this also meant that transaction costs on the Ethereum network increased significantly. The average Ethereum transaction cost on 2 September 2020 was €9,87. Ethereum miner’s on the other hand, did a lot better during September. On the first day of September, fee’s had gotten so high that Ethereum miners made a profit of 425 thousand euro in one hour! The enormous increase was created by all the DeFi hype. As September progressed, this hype began to falter. Fewer coins were being bought and the courses started to trend downward. DEFIUSDT decreased with 52% and the average transaction cost on the Ethereum network went back to €1,78 on October 2nd. So what does it all mean? Again, we would like to repeat what numerous experts have said until now. DeFi was being overvalued in such a short time. Does it mean that the DeFi bubble will pop? Of course not, since a lot of real-life use cases are already being implemented with DeFi. Many experts believe that the price correction was needed and that the entire market will benefit from a slow but steady climb.

In our next DeFi article we will take a look at one of the bigger DeFi projects (SushiSwap), it’s accused exit-scam and his triumphant return.