The Metaverse was one of the hypes of the past crypto bull market. All kinds of coins rose hundreds of per cent, and (associated) NFTs were bought up en masse. Since then, coins and NFTs have dropped significantly in value. Despite the fact that the Metaverse still needs a lot of improvements, the developments are interesting. Companies like Meta (formerly known as Facebook) and Epic Games are fully engaged in the Metaverse. But what exactly is the Metaverse? And which crypto projects or companies are actively working on these developments? 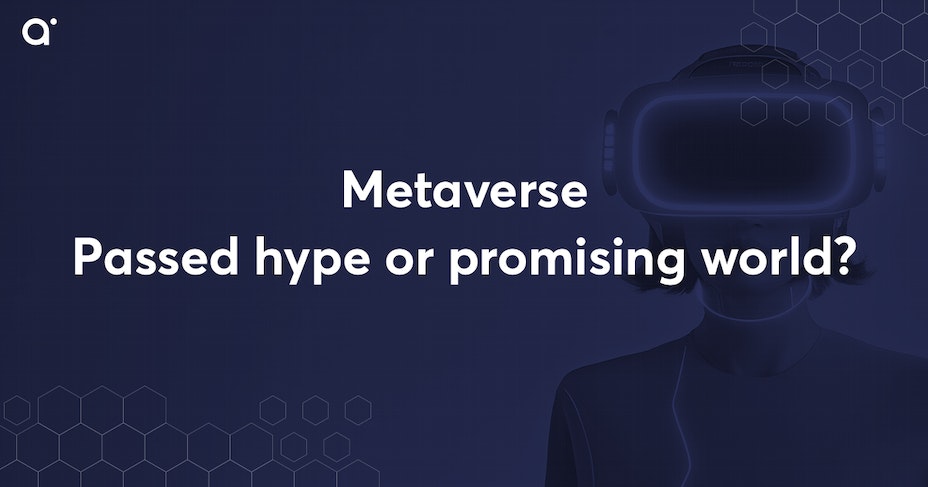 What is the Metaverse?

The Metaverse is a simulated, virtual world in which people live with their avatars. The concept comes mainly from science fiction stories and was first described in Neal Stephenson's book called Snow Crash. In this novel, the Metaverse was an urban environment along a huge long road of more than 60,000 kilometers, which forms a perfect black planet.

In the Metaverse, users can interact with each other. It is a shared, online space. Through virtual reality (or augmented reality), people can be active in this Metaverse. The Metaverse can be used for games, but also for other things like education or socializing. The Metaverse has the potential to extend the physical world into a virtual one. It can completely shake up various industries, such as tourism.

There are several crypto-currencies that are starting to play a role in the Metaverse. All kinds of projects focus on different aspects of the Metaverse; games, art, video streaming, virtual worlds or even the underlying hardware to enable decentralized internet. We will now briefly discuss some coins that are labeled as metaverse coins because they are in some way building this new, virtual world.

On the Decentraland marketplace all kinds of items can be traded. Think gear, equipment, LAND, wearable items, and names which are all backed by Ethereum's blockchain. Since Decentraland's inception in 2020, more than 190,000 items have been traded. The total volume traded (in $MANA) is more than 355 million. This is at the current MANA price close to $110,000.00. As a result, the decentralized autonomous organization (DAO) has raised over $5,400,000.

Apecoin ($APE) is an ERC-20 coin created for the Web3 economy. The token is expected to support the evolution of art, gaming, entertainment, digital events, and storytelling. Through $APE, holders can influence decisions such as resource allocation and certain partnerships. The Apecoin decentralized autonomous organization (DAO) was developed by Yuga Labs in 2021. They were the developers of the Bored Ape Yacht Club (BAYC) NFTs; a collection of more than 10,000 NFTs which live.

The Internet Computer seeks to be a general blockchain on which decentralized apps can be run at web speed. It could, according to its founders, replace traditional IT and enable a new generation of Web3 apps that can run completely on-chain. They do this by using standardized hardware running servers (nodes) that are spread across various data centers around the world to ensure decentralization. Through subnets, scalability would be very high. This Internet Computer could play a role in the Metaverse.

The coin ICP is used to secure the network and facilitate transactions done on this Internet Computer. Through the ICP coin, users are encouraged to contribute to the security of the network. In addition, users can use the coin to store data on the network. Thus, the value of this coin depends (partly) on the adoption of the Internet Computer.

The Theta Network, with its associated Theta coin, is a decentralized, open-source network that uses a blockchain to facilitate peer-to-peer video streaming. By doing so, they want to ensure that the quality of streaming improves and increase accessibility for users. This should increase the efficiency of current streaming services. On this network, smart contracts can run to facilitate payments for transactions.

Axie Infinity has its own governance coin: Axie Infinity Shards ($AXS). Through this governance coin, decisions are made on developments and can determine how the Axie Community Treasury is distributed. Players can also earn coins within the game by completing various tasks. This coin is called the Smooth Love Potion ($SLP) and has not shown very good price action, from a high of $0.36 to $0.00207.

The Sandbox ($SAND) is a community-driven platform that operates in the virtual world. Within this (social) environment, people can experiment, build, and play without the constraints of the real world. Sandbox, therefore, comes from "sandbox" because children often play in sandboxes where they can build and play without having to worry. In computing, the sandbox is often used as a test environment where one can test digital systems without damaging or affecting anything. The Sandbox, like Decentraland, also has a marketplace to trade all kinds of assets such as Voxies.

"To reflect who we are, and what we hope to build, I am proud to announce that our company is now Meta." With this argument, Mark Zuckerberg changed the name of Facebook's parent company to Meta. A rebranding that should indicate the extent to which the company is setting its sights on developing the Metaverse. Through artificial intelligence and virtual reality, the company wants to create a virtual world - a virtual world where everyone is connected. Through virtual glasses or headsets, you can be anywhere you want in no time. Playing a game of poker, enjoying virtual art, or having a beer with friends? What are you going to wear and who do you want to be - a Bored Ape or a Cryptopunk? How will you decorate your virtual home (horizon home)? And what work will you do? In time, these could all be possible questions you will ask yourself before stepping into Meta's Metaverse.

Privacy and security will become important topics in the Metaverse. Your body will be monitored to some extent, and with the use of augmented reality, the real world will have to be visible through the glasses used. This will also make location visible, for example. Meta states that they consider privacy and security very important when developing the Metaverse. However, we have seen before that Facebook's parent company has not taken privacy very closely in the cases surrounding Cambridge Analytica. So, a privacy risk will always remain with central parties.

Not only is Mark Zuckerberg already setting his sights on the metaverse, but game company Epic (the developer of Fortnite) is also looking to move into the metaverse. They recently invested $30,000,000 in a funding round to start developing the metaverse. So, besides crypto-currencies, there are several other ways to invest in the development of the metaverse.

Gartner's Hype Cycle is a graphical presentation of the adoption of certain (new) technologies. In the crypto market, it has been passed around quite a bit. It is used to predict how a technology will be embraced and how to respond by investing in it. The cycle consists of five phases: 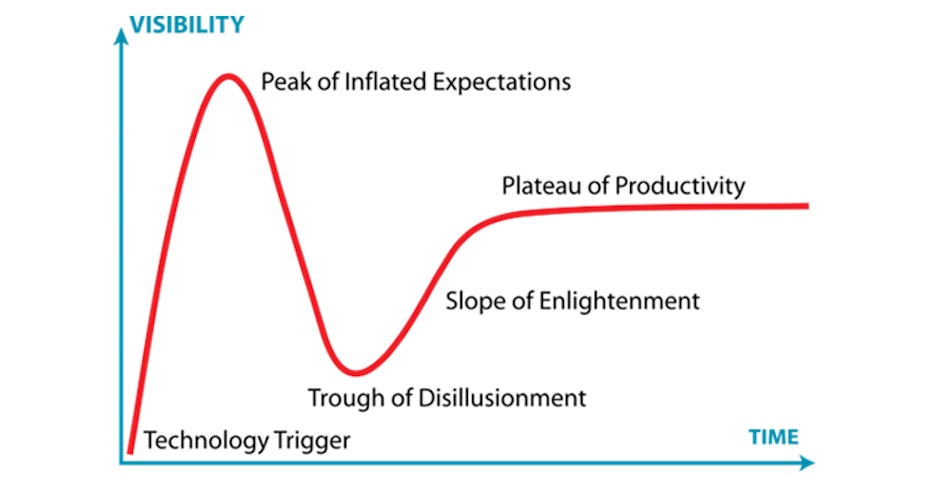 NFTs, DeFi, and cryptocurrencies in general are technologies that would be visually represented on this hype cycle. But, this is particularly the case for the metaverse. Whereas the technology trigger started some time ago with the first developments of the metaverse, we can now say with some certainty that we have passed the peak of expectations in terms of financial valuations. Virtually all metaverse coins have fallen massively in value (some of them more than 90%), and Meta shares have plummeted to just above $100.

After this low point of disillusionment, people should regain interest in the technology in the slope of enlightenment. Adoption revives, and people learn about the potential of the new technology. The value is clear, and usage increases. After this, one reaches the plateau of productivity. At this stage, the technology is more widely used than before and becomes mainstream.

The Metaverse has been one of the hypes of the past crypto bull market. The metaverse is a simulated, virtual world in which people live with their avatar. In it, users can interact with each other and a variety of applications are possible, such as education, social contacts and games. Companies such as Meta (formerly Facebook) and Epic Games are fully engaged in the development of the metaverse, but there are also several crypto projects that are actively pursuing these developments. The valuable potential of the metaverse is clear, but the technology and its adoption have much to improve before it becomes truly mainstream. Still, several crypto projects such as Decentraland, Apecoin, Theta Network, Axie Infinity and The Sandbox, working on different aspects of the metaverse, are interesting investment opportunities to keep an eye on.