After the big crash in 2017, the cryptocurrency market has been steadily growing back to its old self, but this time, stronger, better and somewhat regulated. Curious about why many critics think that the crypto-market is going mainstream in the upcoming years. In the article below you will find the top reasons for why crypto is not only here to stay, but also to flourish. 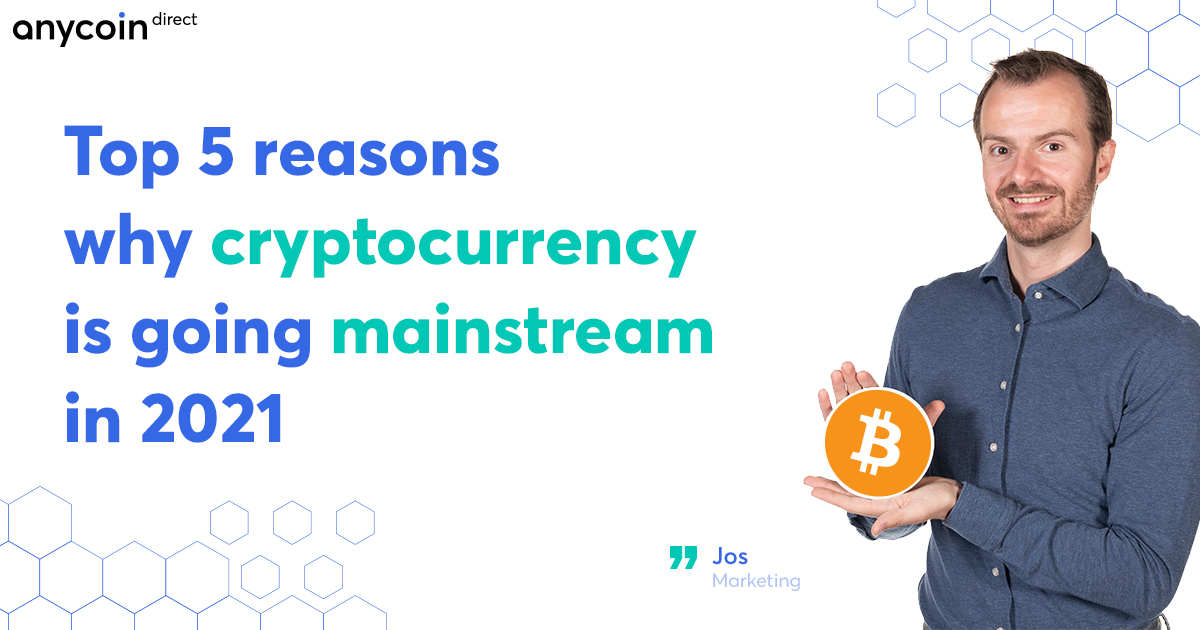 Since cryptocurrency hasn’t been regulated by a governing entity before, a lot of investors didn’t have much trust in the market. Many experts warned about the use of anything that remotely resembled cryptocurrency. Today, this is totally different. A perfect example can be found in The Netherlands, here the Dutch Cental Bank (a governing agency that is committed to creating a stable financial system) has implemented new regulations that will change the crypto-landscape for good. In short, this means that cryptocurrency brokers from The Netherlands are now to be registered and regulated by a trustworthy entity. Since more and more countries are following this kind of regulatory framework, it will spark more trust in the cryptocurrency scene in the upcoming years. Especially for companies and professional investors.

🎉 We did it! 🎉
Since yesterday, we have been registered at Dutch central bank (DNB). We are now one of the first renowned cryptocurrency exchange services that has been registered. This is a huge step for us and the industry!
Read more in our blog:https://t.co/TsoXfV55kY

In the early years of cryptocurrency, your company showed innovation if you were daring enough to accept Bitcoin as payment method. Now this step is easier than ever, because PayPal has integrated cryptocurrency services throughout their platform, starting on 21 October 2020. However, accepting cryptocurrencies as a payment method is not the only way corporations are interacting with cryptocurrencies. For example, one of the biggest banks in The Netherlands, the ING and ABN AMBRO are currently cooperating to look into the possibilities of the use and storage of cryptocurrencies. They are helping to develop a code of conduct for best practices in the industry, and have recently announced their interest in the cryptocurrency industry.

Now you can buy, hold and sell #Crypto with PayPal. Start with as little as $1 in the PayPal app today. Terms apply. https://t.co/ydl63Q5kGB pic.twitter.com/ArZP2FgrSk

In the past year, big companies like Square, Microstrategy, Galaxy Digital Holdings and many others have invested their funds in Bitcoin. Since all Bitcoin transactions are public, traceable and permanently stored on the blockchain, it is quite easy to track and locate what companies are doing with their cryptocurrency investments. With big companies like this supporting the cryptocurrency-branch, it goes without saying that crypto is making its way towards becoming a solid asset.

Building on top of cryptocurrencies

Governments, banks and companies are currently investing in applications that run on the blockchain. Think of JP Morgan (a U.S. bank)that has successfully created and tested a token on the Ethereum blockchain that represents a fiat currency. On top of this, new and useful implementations of cryptocurrency are also appearing. For example a Dutch start-up ‘WordProof’ has released a Word-Press plugin that lets you verify and protect your content through copyright claiming.

Another great example of an application that runs on a blockchain network is Brave Browser. This browser is an innovative way to surf the internet. It is a safer, faster and more private way of using the internet. Applications like these are becoming popular and this will only grow in the future.

A central bank is an institution that is responsible for overseeing the commercial banking system. Lately there have been talks that these institutions would like to release their own digital currency. So what is a central bank digital currency? In short, it means that a country creates and uses a blockchain-based token to represent a form of fiat currency (money that is government-issued). To date, no country has officially launched a CBDC token yet. However, multiple countries are currently in development of these tokens. For example, The European Central Bank, as well as the Central Banks of England, Canada, Thailand and Uruguay. In China a beta version of this digital currency is already being tested.

With all of these interesting developments happening at the same time, we can draw the conclusion that cryptocurrency is becoming more and more mainstream. With big companies and even governments getting involved, a growth and maturity of the market is imminent. Nobody knows what the future might bring, but it sure looks promising!