Dogecoin is the first unique memecoin in the crypto industry. Launched as a joke, the coin now symbolises the volatile, unpredictable and opportunistic crypto market. Let's take a look at what Dogecoin is, its contemporary and historical price trends, and finally: its price predictions for 2022. 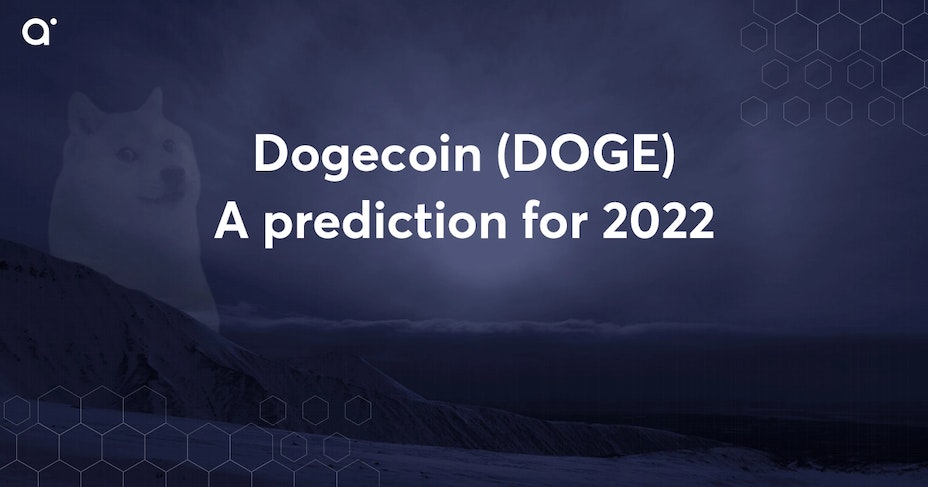 Before we look at the predictions for 2022, let's talk about what Dogecoin is and how this crypto has become so relevant. Dogecoin was founded in 2013 by a group of friends and was developed as a memecoin.

Although Dogecoin is a memecoin, you can use the coin in everyday life. Transactions can be done in a secure manner and in many cases transactions are faster than Bitcoin'. Due to Dogecoin's growing popularity you can conduct transactions with Dogecoin in more and more places around the world.

In the bull run of 2017, Dogecoin showed its true potential as a memecoin.  The value of Dogecoin's coin, called DOGE, rapidly increased by thousands of percent. Its value reached just over 1 US cent, an amount no one would have thought possible at the time.

After the bull run of 2017, the crypto industry entered a bear market. Cryptocurrencies dropped tremendously in value over the years and were no longer worth a fraction. This was also true for Dogecoin. In 2020, the crypto market started to pick up again. First Bitcoin, then Ethereum and then many other cryptocurrencies rose in price. However, Dogecoin did not and remained stuck in its value. Dogecoin seemed dead and buried, until Elon Musk came into the picture.

When one of the richest and most influential person in the world starts tweeting about you, it brings you fully into the limelight. As of last year, Dogecoin can talk about that. Elon Musk was already tweeting about Dogecoin sporadically throughout 2020, but as of December that year, sporadic changed to regular.

Elon Musk proved to be an avid Dogecoin enthusiast and his tweets around Dogecoin were always positive. The value of Dogecoin rose by hundreds of percent and other celebrities and influencers picked up on the hype around Dogecoin.

The value of Dogecoin continued to rise, reaching an impressive value of over 70 cents per DOGE in May. From the hype surrounding Dogecoin, new memecoins were created, such as the Shiba Inu coin and the Dogelon Mars coin.

A characteristic of cryptocurrencies is that they can be very volatile. In the case of Dogecoin, this is an understatement. In the bull run of 2017 to 2018, Dogecoin experienced gigantic price increases of thousands of percent. In the bear market that followed, Dogecoin was only worth a fraction compared to its all-time high.

Meanwhile, partly thanks to Elon Musk, Dogecoin has skyrocketed and the majority of people in the crypto industry know Dogecoin. In order to put the price of Dogecoin through the years into perspective, we have displayed a price trend of DOGE through the years. We do this by comparing the all-time highs and all-time lows of these years.

Whereas most high-valued cryptocurrencies have drawn up a roadmap describing the course to be taken, Dogecoin does not. It is a memecoin that owes its price predictions mainly to influential people, such as Elon Musk, who are enthusiastic about the coin. Dogecoin is therefore highly dependent on other developments than the average cryptocurrency, which often presents several technological developments per year.

Dogecoin lacks real, useful foundations. So what can we expect from DOGE's price? To put it bluntly, that depends on many factors. One of the most important factors in 2022 will be whether influential figures will continue to support memecoins.

Earlier in the article we mentioned Elon Musk, who is a Dogecoin supporter. Other well known phenomena such as Snoop Dogg and Gene Simmons have also frequently expressed positive views on Dogecoin. And there are many others besides them. Naturally there are also opponents of Dogecoin who say that investing in memecoins is dangerous for your assets. Long story short; Dogecoin largely depends on the (media) exposure it gets.

In the crypto industry, Dogecoin has one of the largest and most loyal supporters. Its community is incredibly large. On Twitter, Dogecoin has over 2.4 million followers and on Reddit, the official Dogecoin page has over 2.2 million subscribers.

On these social media platforms, memes are mainly posted. Not surprising for the best known memecoin. But there are also serious issues being discussed such as fundamental and  technical analysis. The community is therefore a very important factor for Dogecoin. Together with influencers they have helped Dogecoin to unprecedented heights. But because of this they can also ensure that these achievements can be undone.

Predicting price projections is an almost impossible task in the crypto industry. Fortunately, a number of price forecasting companies which specialise in forecasting stock and crypto prices have ventured to predict the DOGE price in 2022.

The company DigitalCoin predicts that Dogecoin will hit a maximum value of $0.46337 USD during 2022. This is cautiously pessimistic as Dogecoin has already reached this value.

A more optimistic price forecast comes from CryptoNewsZ. They expect that by 2022, Dogecoin could hit $1.22. Should things not go as bullish as predicted, a value of $0.96 is still assumed. This means that CryptoNewsZ expects a minimum price increase of times 4 compared to today's price.

Finally, we have a look at the price forecast The Economy Forecast Agency. They take a mathematical approach to their predictions and expect Dogecoin to reach a maximum value of $0.42 per DOGE. We should always take these price predictions with a grain of salt, as they rarely come true due to the volatile nature of the crypto market.

As you look further into the future, predicting the price of Dogecoin becomes increasingly difficult. However, thanks to the algorithms used by price forecasting companies, Dogecoin price forecasts for the years 2023 -2025 can be made.

CryptoNewsZ uses an algorithm as well as technical analysis to come up with a price forecast for Dogecoin. Their price expectation for Dogecoin is that it will fluctuate between $0.18 and $0.22 by the end of 2023. By 2024, Dogecoin will be around $0.25 and by 2025, Dogecoin's price is expected to be $0.35.

Analytics Insight expects Dogecoin to outperform their fellow price forecasters by 2023. The price of Dogecoin in 2023 is based on the fact that Elon Musk is taking over Twitter and therefore Dogecoin can be adequately promoted on the Twitter platform. The most bullish forecast for 2023 is a value of $0.40. In 2024, Bitcoin is halving, which normally initiates the new bull market. Therefore, Analytics Insight expects Dogecoin's price to reach a maximum of $0.65. In 2025, they expect the price to rise further and reach a value of $0.77 per DOGE.

Check out the possibilities!