After a long period of time, Litecoin is finally going to implement the long-awaited Mimblewimble update. What is it and what will the update do to the price of Litecoin in 2022? In this article we will discuss what Litecoin is, how the network works and what the forecast is for 2022. 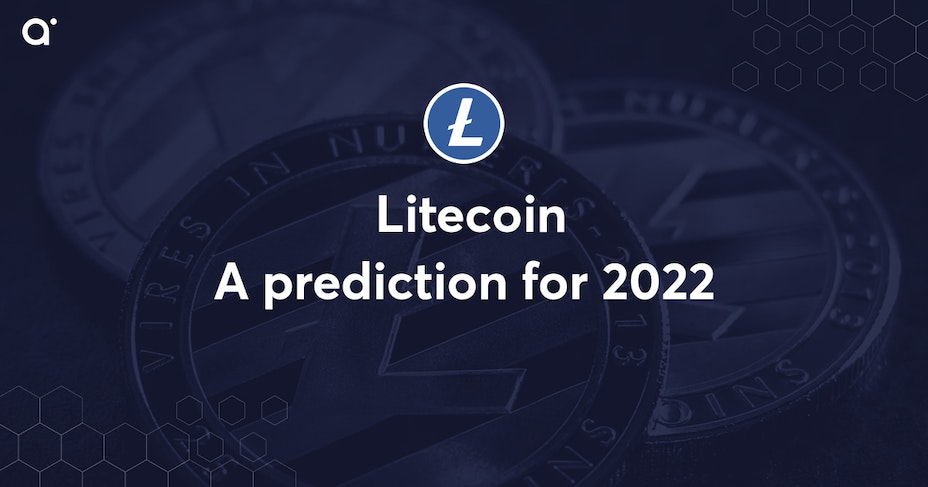 After the development of Bitcoin ,  Litecoin is one of the first alternative cryptocurrencies. The cryptocurrency was launched in 2011 and was developed by Charlie Lee, who previously worked at Google. Litecoin, like Bitcoin, is a decentralised digital currency. This means that the Litecoin network is not controlled by a company, but by users of the network around the world. Like Bitcoin, a third party (such as a bank) is not required to carry out a transaction. This system is also called a peer-to-peer electronic money system. Litecoin is an 'open source' which means that the code that Litecoin runs on, can be viewed by anyone. It is also possible for anyone to make a proposal to modify the network. If more than half of the users of the network agrees with the proposal, it will be implemented.

Litecoin is the first cryptocurrency to adopt the Lightning Network and use it as a Layer 2 Solution. A Layer 2 Solution allows users to conduct transactions in just a few seconds for a very low transaction fee of just one dollar cent.

Why was Litecoin founded?

Charlie Lee noticed that Bitcoin was relatively slow and that transaction fees were high. He therefore wanted to develop a faster and cheaper alternative. Litecoin has been popular since its launch and is very similar to Bitcoin. For example, like Bitcoin, Litecoin uses the Proof-of-Work algorithm.

Litecoin and the Proof-of-Work Algorithm

Litecoin's Proof-of-Work algorithm allows transactions to be validated and new blocks to be added to the blockchain. The major difference between Litecoin and Bitcoin is the speed of the network. For example, Litecoin's blocktime is much lower than Bitcoin’s blocktime. Blocktime is the time between the validation of a new block. For example, on Litecoin's blockchain a new block is added every 150 seconds, while on Bitcoin it is added every 10 minutes. Adding blocks is done by miners. They provide their computer power to solve mathematical formulas. As a reward for solving the mathematical formula, the computer is paid 12.5 LTC. In August 2023 a halving will take place. During this halving, the reward will be halved. The shorter block time allows Litecoin to handle more transactions per second and lower transaction costs.

The Tokenomics of Litecoin

Litecoin did not do a 'Premine' or ICO Launch but did a 'fair' launch. A Premine means coins are given away to individuals. This often involves sending percentages of coins to personal wallets of CEOs and developers of the project. An ICO, on the other hand, is a type of crowdfunding where money is raised to help fund the project. In exchange for the funding, the investor is paid out in tokens.

With Litecoin, however, it was a fair launch where the first LTC coins were earned through mining. With this, Litecoin followed in the footsteps of Bitcoin, which, like Litecoin, conducted a fair launch.

2022 is an important year for Litecoin. After two years of development, the Litecoin network is going to perform an upgrade called MimbleWimble. Other big news is the expected acceptance of cryptocurrencies by The Union Bank of the Philippines.

After two years of development, Litecoin (LTC) has finally launched its long-awaited Mimblewimble upgrade, opening the door to more privacy-oriented transactions on the network. MimbleWimble is a privacy protocol that can ensure the privacy of users. This makes it different from transparent protocols like Bitcoin. To give an example, you can look at the Bitcoin ledger. Here you can see which wallets exist and how much Bitcoin they hold. You can also track every transaction.

With a MimbleWimble protocol, no addresses are visible. This means that no one can see how much Litecoin you own and which address you are sending Litecoin to. Another important aspect of the protocol is that the IP address which is used to send Litecoin is also hidden.

The MimbleWimble integration in Litecoin was made possible by Mimblewimble Extension Block (MWEB). The lead developer of MWEB, David Burkett, says the protocol can even be used to pay salaries and make purchases such as real estate.

MimbleWimble's has been used by other crypto currencies for some time now. Litecoin is following in the footsteps of well-known crypto coins such as Monero (XMR), Dash (DASH) and Zcash (ZEC). Besides privacy are scalability and fungibility important features of MimleWimble. In recent years Litecoin has struggled to stay relevant and therefore they see the integration of MimbleWimble as a tipping point. Don't forget that Litecoin was the number two for a long time instead of Ethereum.

Adoption by The Union Bank of the Philippines

Recently, Bloomberg shared a report in which they indicate that The Union Bank of the Philippines is planning to offer crypto trading and custody services. Among others, trading Litecoin will be possible at the 10th largest bank in the Philippines. In this way, the bank wants to benefit from the national adoption of crypto by citizens, who, according to the report, invest 3 to 5% of their income in crypto.

Advantages of Litecoin over Bitcoin

Based on the topics we have covered in this article, there are some advantages of Litecoin over Bitcoin that can be concluded:

The speed of the Litecoin network

The Litecoin network was initially built because developer Charlie Lee found Bitcoin's network too slow. The speed of Litecoin is therefore a big advantage over Bitcoin, as with Litecoin it is less than 2.5 minutes between mining a new block, while with Bitcoin it is ten minutes.

The reward for mining a Litecoin block is 12.5 LTC at the time of writing, while for mining a Bitcoin the reward is 6.25 BTC. However, it should be noted that the value in USD is significantly in favour of Bitcoin. For example, mining a Litecoin block currently only gets you $1200 in LTC coins, while mining a Bitcoin block gets you over two tons in dollars of BTC coins. So while for 'miners' it sounds more interesting to mine Bitcoins instead of Litecoins, for true Litecoin fanatics it may be different.

Larger supply (can be seen as an advantage)

Although we ourselves do not make price forecasts on cryptocurrencies, there are analysts who make price predictions for Litecoin using algorithms or trend lines.

The YouTube channel Altcoin Daily has done an extensive analysis on Litecoin and have made a price  forecast for upcoming years, by looking at Fibonacci levels of the trading pair LTC/USD. They believe Litecoin could reach a price of at least $2,568 per LTC coin between 2022 and 2030. Should the updates be successful, and the course of the crypto market be extra bullish, LTC could even reach a price of $8,000 per LTC according to Altcoin daily.

Digitalcoin, like TradingBeasts, has done price forecasts for Litecoin through 2025 based on their own algorithm and expect the following:

Once again, we would like to emphasize that we do not make any predictions ourselves and that most predictions do not come true, because nobody knows what developments will take place in the future and how the crypto market will react to them. Making price forecasts to the exact dollar cent is therefore unrealistic, but can be used by some as an indication to make the right decision.

Litecoin has long been at the top, but in recent years has many cryptocurrencies passed Litecoin. For years, it has been fairly quiet around the network, but in 2022 the long-awaited upgrade is expected to take place. Therefore, 2022 will be a 'make it break it' year for LTC. In this year, they will integrate the privacy protocol (MimbleWimble) within the current network. This will allow users to conduct transactions on Litecoin's blockchain completely anonymously. Other big news is that a recent report by Bloomberg indicates that The Union Bank of the Philippines will be adding crypto trading services to their current services. What the price expectation for Litecoin will be in 2022 is hard to say, but the developments give hope. Whatever the upgrade will bring, the foundation is as strong as ever. Nevertheless, there are always analysts who make price predictions. We would therefore like to emphasise that many price forecasts do not come true and they should only be used as an indication of the decisions you make.

Buy Litecoin directly after logging into your Anycoin account.