The Solana blockchain has been a well-known player in the crypto world since its launch in 2020. At the time of writing, Solana crypto is ranked #7 in CoinMarketCap. That makes it one of the largest coin at the moment. Because the project is enjoying a lot of publicity, we want to turn our eyes to Solana. What is Solana, and what can you expect from the coin in 2022? 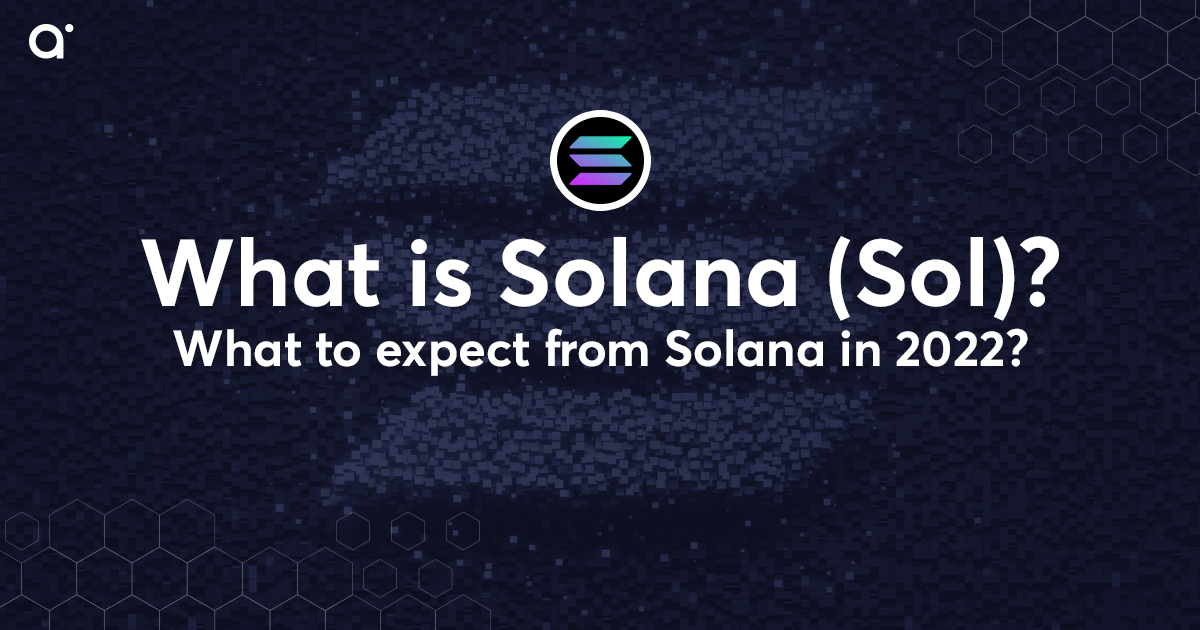 Solana is crypto which its inventors refer as the blockchain of the new generation. The platform is known as a very fast network that can process up to 700,000 transactions per second. This makes Solana one of the fastest blockchains. The block time is also very fast on the Solana blockchain. The block time is the average time between the tracing of blocks. The blockchain is capable of tracing the next block within 400 milliseconds. Compared to Ethereum (every 10 seconds) and Bitcoin (every 10 minutes), this is extremely fast. Solana is therefore seen by many as a formidable competitor to Ethereum. In addition, at the time of writing Ethereum's transaction fees are hardly interesting for small transactions due to the high prices. At the time of writing, transaction fees for executing a DeFi transaction are between $50 and $100 per transaction and executing an NFT transaction can be as high as $150 per transaction.

The crypto currency associated with Solana is the SOL coin. This coin has climbed into the top 10 in CoinMarketCap since its development in 2020. On November 6, 2021, the coin managed to reach an all-time high of $260.06.

Anatoly Yakovenko founded Solana in 2020. He developed the Solana blockchain together with a foundation from Switzerland. Yakovenko, together with his team of experienced developers, built a network capable of carrying out large volumes of transactions in a short period of time. This solved many of the overload problems that arose with Ethereum and Bitcoin, among others.

As mentioned earlier, the speed of Solana is one of the strengths of the network. Also, carrying out transactions on the network is very cheap. For example, a transaction can be performed for less than one cent. They achieve this through Proof-of-History (PoH). PoH is similar to the Proof-of-Stake organism but adds the element of 'time'.

How does Solana's PoH mechanism work?

The Proof-of-Work mechanism makes it possible to record transactions from the past. This is done with the SHA256 hash function. The hash function takes the input of a transaction and produces a unique output. The network then uses this output as input for the next transaction. Doing it this way creates an unbroken chain of hashed transactions.  This determines a clear sequence of transactions that a validator adds to a block. The hashing takes a certain time to complete, which then ensures that validators can clearly analyse how much time has passed. Because each node gets its own cryptographic proof, nodes do not have to wait for other nodes. This allows transactions to be performed with very high frequency.

Another reason the Solana blockchain is fast is because of the possibility of 'staking'. The tracking of new blocks is done by validators. They deploy their SOL tokens to the network by locking them in for a long period of time. This is called staking and as a reward for validating a block, you are paid out in Solana. The uniqueness of Solana is that 25 blocks are validated by 25 different validators simultaneously, allowing the network to process transactions quickly. You can already strike with just a small number of SOL coins. Being allowed to validate a block is made possible by the voting system. To be allowed to vote you pay approximately one Solana. Then a random decision is made as to who will be allowed to validate the block.

A fast network that can handle an incredible amount of transactions. That is Solana's vision. Yet they did not succeed immediately. In September 2021, the network experienced an overload which rendered the system unusable for 16 hours. Validators were unable to validate transactions due to the overload. After a restart by node administrators, the network went back online.

The real reason for the overload is not clear. It is suggested that Solana was subject to a Distributed Denial of Service (DDoS) attack, which caused many transactions to fail. It is also suggested that the launch of Solchicks (DEX) caused the overload.

Whatever the exact reason, the fact that node administrators are needed to reboot the network raises questions. Is the network really decentralised? That's a sensitive topic among the crypto community. And decentralisation is exactly what cryptotechnology stands for. On top of that, all tokens have been created by the owners of Solana, of which only 50% of the available tokens have been put into circulation.

Solana went down again at two o'clock in the morning (UTC+8) on January 4th. According to users of the official Telegram community, the attacker is suspected of using spam to conduct a DDoS attack.


The NFT world is booming and there is a lot of hype around it. An NFT is a smart contract on the blockchain and can be used to register digital art on the blockchain. At the moment, Ethereum is the largest platform in terms of NFTs. However, the Solana network is also growing and with the Solsea platform is well on its way to compete with Ethereum. Although the platform has some catching up to do, Solsea has a number of advantages over OpenSea (Ethereum platform):

In 2021, Solana was one of the best performing coins in CoinMarketCap's top 100. In particular, the speed and low transaction costs had a positive effect on the price. However, the Solana blockchain has also experienced overloading. This has shown that the blockchain is not watertight and has also shown that you can question whether the network is decentralised. This is causing a split between believers and non-believers. Analysts on YouTube also have mixed feelings. By early 2022, the price has dropped below $100, causing headaches for analysts. Analysts on YouTube calculate a drop to $50, while others expect Solana to reach its old ATH of $260 per SOL.

Solana is a platform that many consider a good alternative to Bitcoin and Ethereum. The platform is faster and can conduct more transactions in a short period of time. The transaction costs are also a lot lower. From its launch in 2020, the SOL coin has done more than well and the price has climbed from just over $0.05 to an ATH of $260 per SOL. By early 2022, the price has dropped below $100 and analysts have 'mixed feelings' about the coin in 2022. What you can ask yourself is whether you can trust the platform. The Solana blockchain has been overloaded a number of times and this was subsequently resolved by node administrators. The question of whether the network is decentralised is therefore justified. That the network can develop as a competitor to Ethereum in the NFT world is a step in the right direction.